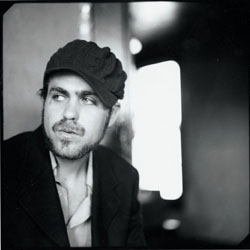 Clarence Greenwood, aka Citizen Cope, has a certain calming charm with underlying groove that has hipsters, hip hoppers and indie poppers collectively dancing and swaying together. I got a moment to hang with Cope pre-show in his RV to talk about life on the road, his inspirations and the misconceptions people have about him.

TIG: Since this column is called “Coffee with a Rockstar,” let’s just jump in with: what kind of caffeinated beverage do you generally drink?

TIG: I was reading that your name, Citizen Cope, is a derivative of your middle name. Tell me about that.

CC: Cope was a nickname I got when I was a kid and I decided to use it for an aka. My name is Clarence Greenwood, but I wanted to have more mystique behind my name.

TIG: You were born in Memphis, correct?

CC: Yeah, raised in D.C., and I’ve lived in Brooklyn for the last 5 years.

TIG: Do you feel as if DC or Memphis is your hometown?

CC Definitely more DC, but actually I look at Brooklyn as my hometown now pretty much.

TIG: So, basically wherever you are is what you call home?

CC: Yeah, cause that’s where I live now, I’ve been there quite a while.

TIG: And which city has influenced you most musically?

CC: The genesis of what I started developing was when I was in DC — just like the go-go music and stuff like that as well. The whole attitude of DC kinda has an energy because it’s an outcast city that once you leave it, you have all this energy and you don’t know where it came from; with all of the monuments and there’s a lot of stuff that somewhat depresses the city a little bit. A lot of the artists like Marvin Gaye, Donny Hathaway, Roberta Flack, all the way to Danny Gatt and Emmylou Harris have always had a sense of… well, there was always a little sadness in what they did but also something uplifting that brought them out.

TIG: What genre do you consider your music?

CC: I don’t know. It is what it is: which is, it has choruses, has verses, has melodies. It’s just songs in traditional form.

TIG: Do you ever think of that when you’re writing a song like, “I want this track to have a more hiphop flavor?”

CC: No, I think it just all kinda comes. I take what I’ve liked as a listener and I try to add that.

TIG: So, when you’re on tour, do you listen to music more or read more?

TIG: Really? Why do you think that is?

CC: When we’re cooped up in a van, it isn’t really conducive to kickin’ back. It’s hard to read like this {shakes hands while he holds an imaginary book}. There’s been some banter in the van. Everybody is talking so I guess it’s more dialogue going on right now.

TIG: Is anyone else in your family musical?

TIG: So no one was shoving a guitar in your arms when you were young?

CC: Nah, nothin’ like that. I always thought that music was something mystical, something that only prodigies could do and that it had to be taught. Now I look at it more as an evolving artist. I’m a poet straight, but music has been the conduit that got me there.

TIG: Are any of your songs autobiographical?

CC: Yeah, I think a lot of the songs are an analogy of something that’s happened to me or somebody that I’ve been with or it’s a person I’ve run into, a situation I’ve been in or a feeling I’ve had. Just whatever inspires me.

But there’s always a correlation between your life and what you’re writing about and it’s not like… Like, in “Salvation” when I said I got shot by the devil. “It grazed my eye and I lost half of my sight.” It’s not like {points to his eye}… see what I’m sayin’? In the context of what I’m sayin’, I was trying to make a point about the power of this bullet or this spirit, it wasn’t about… well, it’s a metaphor.

TIG: Who would you pick to tour with if you could choose anyone?

CC: I would love to tour with… Lauryn Hill. That would be dope.

TIG: Do you find that people have misconceptions about you and your music and if so, what are they?

CC: Yeah, they do the whole thing of “blue eyed soul” sometimes or they focus too much on my color or somethin’. I think that music should transcend those kinds of barriers we have in society. I don’t understand that. I think it’s a shortcut a lot of times. If any artist uses their heart in their music, I think it has soul. Jeff Buckley had a lot of soul, Kurt Cobain had a lot of soul. Thom York has a lot of soul.

If you’re talking about that kind of blue eyed soul, then I identify with it. But what they say about it is more like somebody that’s copying somebody else’s style and not being original. I don’t think you can listen to my voice and say, “Oh, he sounds like that guy.” Cause I mean, I’ve been influenced by a lot of cats, but I don’t necessarily say I sound like Otis Redding or Joe Cocker or whoever is out there. I just think that whenever you put your emotion into your music, you’re really exposing yourself for people to take shots at. It’s something I didn’t expect so much of, but you’ve got to take the good with the bad. Some people really love it and some people just take shots at you.

TIG: Is that where bullet and a target came from?

CC: Bullet and a target has a lot of different meanings. Well, let me first say the songs kinda create themselves, they feed off themselves and they happen. Anything I say about a song is in retrospect more so than I planned it to be like that; I’m looking at it listening to it now.