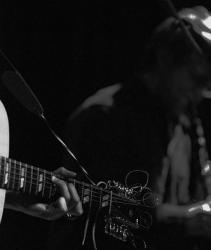 Following their self-expressed mediocre in-studio (“Man you guys, that was kind of bad!”), and less-than- comfortably awkward chat with Stevie Zoom for the KEXP podcast , the Brooklyn five-piece Clap Your Hands Say Yeah! definitely redeemed themselves at the latter of their two Seattle shows. Sunday marked their performace for the always bouncy all-ages crowd with an opener I was incredibly giddy to see — Elvis Perkins, with backing band, “Dearland” …Elvis Perkins in Dearland, if you will.

Everyone knows Mr. Perkins’s story and how much of the unfortunate events in his life (mother died in 9/11 plane crash and father/stage actor Anthony Perkins died of AIDS in the early 1990’s) incidentally inspired the 11 melancholy tracks of his glorious musical debut, Ash Wednesday.

At the show he performed with the sorrow of a thousand rainy New York nights, incendiary qualities that rival Bob Dylan’s, and every ounce of soul a person could possibly convey devoid of pretentiousness and/or irony. He took the audience through the days of his life — his many plights through “Doomsday.” Even better? He did all this without ever once missing a note. I was blown away by the strength and richness of his vocals. It was 40,000 times better than on the album. Elvis got soul- Elvis is flyyyyy!

Clap Your Hands Say Yeah was a party. Though I will admit, Clap Your Hands Say Yeah brings to light a new definition for “acquired taste,” a staggering amount of people seem to underestimate the band for Alec’s vocals. Mr. Alec Ounsworth possesses the unique ability to mold his voice into a sound that is, in my opinion quite reminiscent of wild geese. (NOTE! NOT A BAD THING! As the affable sound tech fellow at KEXP and I discussed, unique voices are a gift! I think Alec’s voice gives the band a rather… ”organic” edge, if you will).

Their music is very much like a fine wine (not that I would know anything about drinking that stuff). Listen to/consume it a couple times and it grows on you. I was blown away the first time I caught CYHSY at Sasquatch in 2006. Tonight, I was impressed. These proud wearers of striped pants took the stage and blew through the first half of their set quite uneventfully. You know… the occasional ant crawling across the massive screen behind the set (which I spied keyboardist/guitarist Robbie Guertin spying inconspicuously far too many times throughout the set); however, the guys definitely turned it up for the second half. A noticeable change in enthusiasm was noted towards the second half of the set when several tracks off their initial eponymous album were relayed, “Over and Over Again” and “Home on Ice” (the song that really got me into them a while back) being among them. At one point, Alec even busted out a megaphone and egged the crowd into chanting “CLAP YOUR HANDS!" for good measure, I suppose.

And “clap clap clap” everyone did- all the way through the very end. A very well deserved applause, indeed.