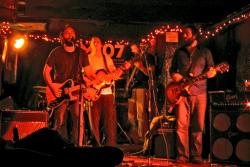 Each fall, countless college radio staffers and music industry insiders descend on NYC for the CMJ Music Marathon, a five-day bonanza of rock shows during which in all certainty you will miss many of the bands you went to see due to scheduling conflicts and filled-to-capacity venues. In turn, you end up discovering some band that you never heard of before, or just finding a place to rest your aching feet.

This was my second year attending the madness, and here are my highlights from the first half of the week.

After arriving on Tuesday and getting my press badge, I met up with my friend Fat Asian Baby for some Birmingham, Alabama bands at the Lit Lounge. On the stage upon my arrival was 13ghosts, a bearded bunch of Southern gentlemen whose melodies were striking and lovely, and whose sound was full and dynamic. I had never seen them live and I was very impressed. Worthy of note: 13ghosts have worked with Maria Taylor (of Azure Ray), who appears on their album Cicada.

On Wednesday I ventured out for the New Zealand showcase at The Delancey. My purpose was to see The Brunettes, who I've been crazy about since I saw them open for Rilo Kiley in '05. The afternoon show began with a greeting and introduction by actor Rhys Darby, in character as Murray Hewitt — manager of Flight of the Conchords. He cracked me the shit up, and the small crowd laughed heartily along with me.

Up first was Liam Finn, eldest son of Crowded House frontman Neil Finn. Accompanied by only a female vocalist named E-J Barnes (who herself was exceptionally talented), Finn's set began on a quiet acoustic note, but suddenly a flurry of pre-recorded instruments blasted through the speakers while Finn jumped behind a drum kit and pounded away. This trick could have been hokey, but Finn pulled it off beautifully a number of times throughout the set, bouncing back and forth from guitar to drums and from acoustic to full "band," all the while delivering stunning vocal duets with Barnes.

It was bizarre to be two feet away from The Brunettes in a tiny venue after having seen them on a huge stage last time, but there they were, setting up their gear right beside me. They banged out several of their signature playful pop songs, though seemed to stick with their newer material from Structure and Cosmetics. Adorable and endearing as always, they had a full band that included horns, and on one song, co-leader Heather Mansfield busted out on clarinet before they launched into a "YMCA"-style dance to the letters "B-A-B-Y" for the song "Brunettes Against Bubblegum Youth," which leads the new album. (There's a YouTube video of this performance out there but the quality is not great. Google it up if you dare.)

I hit the Puck building (this year's CMJ headquarters) to see my current band crush Wild Light do an afternoon set on Thursday. Finishing their set when I arrived were U.K. band Connan and the Mockasins, who totally reeled me in. They were wacky, but good-wacky, with a guy singer who sounded like a girl and fun jagged rhythms alongside playful lyrics. They achieved a real lo-fi sound with guitar, bass, and drums and collaborative vocals. Check out their "Sneaky Sneaky Dogfriend," which you can download at their MySpace.

Wild Light came on next and completely melted me as usual. They're from Boston, so I have seen them a few times, but now that they're touring with Arcade Fire my chances are fewer and farther between. They make immensely pretty indie songs with lots of lush harmonies and complex melodies, and each of the three frontman switch instruments and lead vocal duties while Seth Kasper (also of Boston's Hooray for Earth) provides the beats behind them. They get it right at every turn, and you just sort of listen in awe of how good it is.

From there, I hit Piano's for two vastly different shows on different floors: Elk City upstairs and Yo Majesty downstairs. These shows were scheduled to happen at different times, but because of the downstairs schedule being delayed, they actually happened in tandem, which put me in a conundrum. I started with Yo Majesty, who I saw once before opening for Cansei de Ser Sexy (CSS) and loved — and this time they only made me love them more. Inexplicably down to two members from three, and with a dread-locked DJ supplying the backdrop, Shunda K & Jwl. B quickly captivated the crowd, who obeyed their commands ("Jump! Jump!", etc.) and ate the whole thing up. I stayed for four songs, including favorites "Club Action" (often cited for its repeated "Fuck that shit" chorus) and "Leather Jacket," before heading upstairs.

Elk City were well into their set, but thankfully I caught a handful of songs. I'm crazy about their album New Believers, and was thrilled to finally see them in person. Their music and general demeanor was fitting for a lounge-y atmosphere, though the daylight streaming through the windows seemed a little out of place (it was still only about 5pm). Singer Renée LoBue sang with visible passion and clarity despite the sadly small crowd (which doubled after Yo Majesty's set ended). After their set I got to chat with Renée and bassist Barbara Endes, who answered your imaginary questions. Read on to see what they had to say, and check back for Part Two, featuring the rest of my CMJ adventure and another imaginary interview!

Q: Beatles or Stones?
Barbara: Why do you have to choose? Right now for me it's the Stones, but I grew up listening to the Beatles.
Renée: The Who.

Q: Have you guys done South by Southwest before?
R: No, we'd like to.

Q: Do you have any thoughts on the difference between CMJ and South by Southwest?
B: There's a lot more pot in Austin.
R: And a lot more barbecue.
B: It's all on one strip so you kind of wander from bar to bar and you don't have to deal with cabs and subways. That takes some of the time out of it.

Q: What New York bands should the imaginaries be checking out?
B: Camphor's pretty cool. They're our labelmates.
R: We just got back from Pop Montreal, and we saw that band Man Man, who I've never seen before. I think they're from New York. I liked them.
B: We like Elizabeth Harper a lot too.

Q: Do you have any pre-show superstitions?
R: I don't shave my legs.

Q: What if you've got a bunch of shows?
R: I don't shave my legs. I don't care. If I have like four shows in a row, I'm just going to be some hair and some heels.

Q: What does Elk City really need right now?
R: We need two things. Number one: We need to go to Austin to play South by Southwest. Number two: We need to make love. That covers it.
B: You mean every day right?
R: Yeah.

Q: If you could fight anyone alive or dead, who would it be?
B: George Bush.
R: The Hamburglar.
B: I think you'd win. He's got really high c
holesterol.
R: I don't know though, he's got that mask on and he's all mysterious.

Q: What are your thoughts on Radiohead's self-release?
B: It's a great record, and I think they can do whatever the fuck they want. Any band could do what they're doing, and should do what they're doing, but because Radiohead's doing it and they're huge, everybody's talking about it. But any band who puts their shit on the web is rolling the dice, and some people are going to pay for it and some people aren't anyway. It's already kind of the case, isn't it?
R: I think they can afford to do it because they're Radiohead, but I also think they're making a statement about the current climate of the music industry. I hope music is still valued as much as it was. It's a little scary. Art should be free, but that's a contradiction in terms sometimes for the artist so that opens up a whole other debate. In a nutshell, I do admire them for doing it. I think they're almost doing it as a commentary on the climate of where the music scene is today, so for that alone, I respect them for doing it.
B: It's also like a challenge to listeners: 'Most of you are going to get this for free if you want, but think about it before you take it for free. Give us like two fucking bucks if that's all you want to pay for it.' I think it makes people think a little bit.