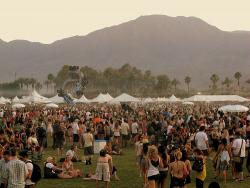 Jeanine Anderson May 5, 2008 no Comments

Coachella Music and Art Festival was the perfect spring festival for a sullen Northwesterner: sun, music, art, grass, heat, and shiny beautiful people. There were big names (Prince, Roger Waters) as well as “who-is-THAT?” discoveries. The grounds were small enough to float stage-to-stage to catch as many acts as possible.

The festival kicked off on Friday with the to-be-expected stupid traffic jam to get into a parking lot. It’s just part of the experience, yo. Note to self for 2009: remember to bring a cable to plug the iPod into the rental car stereo.

Because of the traffic I missed out on a shitload of groups I was hoping to see: Midnight Juggernauts, Rogue Wave, Dan Deacon, Les Savy Fav, Battles. Oh well. A housemate drove my rental car and we parked next to another car full of our posse. Careful observation of where the car was parked paid off in the dark later since there were no row numbers or markers of any kind. Racing away from the cars, we were in a big rush to get to the meet up place inside for fun and games during peep Adam Freeland’s set in the Sahara tent.

At the meet up spot, we donned gold lame robes and each took a silver balloon with the letter “F.” We were stunning. Truly. We congratulated ourselves on how fabulous we looked, then the driver of my rental car said, “Do you have the keys?” WTF. "No I don’t have the keys," I said. "You drove. Shit. Where are the fucking keys?" Bags emptied, pockets emptied, we came up empty. This put a damper on our afternoon, but hey, I thought: let’s just go with the flow and hope it all works out in the end. The fallback position was a cab ride back to Palm Springs (goodbye $175) and calling the rental company in the morning.

With our gold lame robes and our “Fs”, 25 posse members walked across the grounds and entered the backstage of the Sahara tent. W00t! Backstage. Hey, there’s DJ Mehdi. And Xavier deRosney! And Alicia Silverstone! And a bunch of other people I should probably recognize but don’t! I was the perfect person to bring to a party with celebrities: I didn't recognize any and thus could converse without gushing.  (Maybe one of them had our keys.)

We laughed and took lots of pictures of ourselves, the balloons, the backstage area: trying to capture what it felt like to live the fabulous life for a minute. Then it was onstage for the Adam’s first song. He started slow, built up, broke it down. We danced our asses off, then a few brave posse members stage dove. Holy crap!
Off the stage, into the audience, dancing madly, cheering for Obama. Yow! One of the funnest times, evah! End of set, we went backstage again (free water!), more pics, then back out into the teeming masses in our gold robes and balloons.

As for my musical adventures on Friday? Here’s the run down:

Tegan and Sara: Two songs. Ok, but I didn't hear enough to decide if I liked them or not.

Dan LeSac and Scroobius Pip: One song. I was not in the mood.

The Raconteurs: Three songs. Jack White was an awesome rocker. I’m sorry I missed the show at Neumo’s.

Goldfrapp: Two songs. The singer was an angel and the band was tight. I could have listened to more, but no time.

Aesop Rock: One song. I liked this guy lots but too much schedule competition and I’d seen him before. Next time.

Datarock: Three songs. Boys in red tracksuits whipped the crowd into a roaring frenzy. Fun, fun, fun. Packed  tent. They are a must-not-miss when in town.

The Verve: Two songs. They felt and played like a schedule-filler band. I won’t be seeking them out.

Spankrock: One song. I liked their mixes.

Fatboy Slim: Seven songs. Good, reliable, energetic, with an excellent light show. The tent was packed and crowds were overflowing outside. We hung out in the back with elbow room to move around (and dance!).

And the keys? Turns out they were left in the unlocked car. Unfortunately a purse was stolen out of the trunk — but at least the douchebag didn’t throw the keys into the bushes. At 1:15 am we started the long painful exodus from the parking lot. An hour later we were out of the walled-in rectangle and we rolled into our Palm Springs house at 2:45, too bummed about the purse to hit the after-party at the other posse house. There’s always tomorrow, we thought. It was only day one, after all.