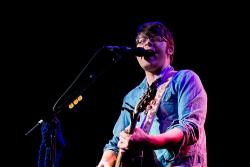 Replete from all musical accompaniment save for his own voice and an acoustic guitar, Colin Meloy proved to be one of the few regarded figures missing from modern society–a true storyteller, full of conviction and speaking in the truth of human nature. While he was once a key entertainer and keeper of histories, the verbal storyteller has gone to the wayside for television and quick to digest tidbits catered for the common affliction of "ADD".

Let us get the record straight here: I cannot get into the Decemberists, no matter how hard I try. There's nothing notably wrong with them per se, but I have not been able to sit through an entire one of their songs. Yet, the one thing I agree with in all the ravings is the masterful way a story is told through the lyrical talents contained in the songs. Taken out of the elements of which I do not enjoy them and put in the single hands of their creator, the tales written by Colin Meloy performed in such a bare way as his solo set were gripping to my heart. Watching him perform for a sold-out Showbox on a Friday night, it seemed the whole world was twinkling, although I'm sure the candlelit bar had nothing to do with it.

Meloy's inflections are curious; aside from reviving a near defunct form of narrative, his voice is not from this era either. As his prose filled the air, I felt moved to inwardly reflect in a darkened moment or be out away from civilization taking in the beauty of the natural world. Across the open room, the younger in attendance were captivated, lingering on his every word. It was said he was flawless, and truly, despite forgetting some of the words on nearly every other song, Meloy could not do the crowd wrong. Any mistake was laughed off and covered up with the crowd already singing along, picking up the errors.

Much to my dismay he did not play "We Both Go Down Together," the eternal love story I fell for while listening to his solo NPR recording. He pulled out three part "The Island: Come And See/The Landlord's Daughter/You'll Not Feel The Drowning." The crowd was held by the time keeping on "The Perfect Crime," undoubtedly the best part of the set. Laura Gibson, who was the entrancing opener and also not of this world, joined him for a duet just before the closing. Ending just around the hour mark, Meloy treated us to near expected encore, the first song a cover of Joanna Newsom.

Near the back in the seating area, I watched as older couples fell in love over the spirits, both the ones you drink and the supernatural entities he had created, they too caught up in the twinkle.