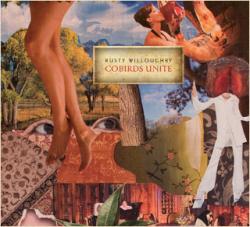 It’s charming to consider what recent gig-attending fans of Frank Black, Chrissie Hynde, and Bob Mould who first get to hear Rusty Willoughby and Rachel Flotard come out and sing and play might think of Cobirds Unite, album and band (there are plenty of music lovers who will have their chance, as the band tours and plans to play a week of shows through SXSW this next year).  As they crush out with the rest of us longtime Willoughby enthusiasts, do neophyte audiences think this might be the most early-developed debut Americana performers they’ve ever heard?

Maybe they’ll think: How come this band isn’t more acclaimed, already elevated by their local music press? It’s easy to assume they inevitably sway and bask in gentle homespun romps like “C’mon C’mon” and “Crown Of Thorns.” But once they’ve purchased Cobirds Unite at the merch table and brought it home to hear that these are some of the finest lyrics they’ve heard in a while sung by two of the creamiest voices they’ll ever hear, they’ll realize they’re in over their heads in a very good way – I’m not quoting a single lyric in this review, as I want them to be as surprising and satisfying for you as they were for me when I discovered them upon repeated listening.

There’s an easy Everly Brothers glow and bittersweet Buddy Holly swoon honeying up the self-titled album’s opening track “Wrecker Of Hearts,” intriguing one further inside. But the entropy keenly described in “Crown Of Thorns,” the thirst for hope exuberant in album closer “Streets Of Baltimore,” the Gram Parsons C&W-soul of “Do Right Woman,” and the Nick-Lowe-would-die-for-pure-folk-pop-joy of “Seventeen Express,” will keep these high-end sipping songs spinning in whatever music player used most often.

The music here is perfectly played, but not frozen in craftsmanship. There’s space and grace to fill it. Restrained, but not dispassionate. Perhaps Cobirds Unite could use some punchier, grittier material and performances, and you sort of expect it with the presence of Flotard (queen of Visqueen), but once you do fall for Willoughby’s 60s/70s folk-rock mastery, you miss nothing else. The elegant production and eloquent picking on various instruments by Johnny Sangster makes this several cuts above the usual collection of new-alt-country Ballard tumbleweed tunes, with violinist Tilman Herb and cellist Barb Antonio, and contributions from others, wonderfully fit into the pastoral presentation.

Rusty Willoughby doesn’t sound this good by luck or accident. He sounds and seems young, but he started out locally in the Dwindles around 1985, taking their name from a Teardrop Explodes song. They soon became the well known Pure Joy, a band you couldn’t resist in the post-punk era before heavier sounds more defined the local milieu.

Willoughby would do a lot of wild things in the margins and in the underground, such as appearing in the band Sick Man of Europe (with Kurt Bloch and John Sutherland), then Flop and Llama. For a private perfectionist he had a lot of influence on Seattle music, whether people outside of the scene realized it or not. But you don’t need any deep knowledge of his pedigree to pine for Cobirds Unite. It sounds like something he’s been patiently planning his whole life for, is as timeless as Sweethearts of the Rodeo, and it’s all happening right now. There’s no reason not to start here, with these dozen gems.