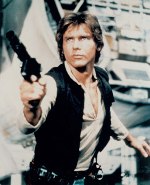 Just in case you didn't notice — just in case you are too busy — rightly — being wrapped up in your outrage and good works, I wanted to take a moment to let you in on a little secret: WE'RE WINNING.

Now, before you go all Luke and start whooping inside the Millennium Falcon "I got one! I got one!" and I have to go all Han and be like "Don't get cocky kid! This ain't like dusting crops!" let me remind you that my little summation is based entirely on you maintaining your level of righteous indignation and doing far more this election year than you've ever done before. Marathons are won and lost in the final mile, and we're *so* in a marathon with the forces of evil this year.

But back to the winning, you say?

But it's more than that. Kerry is going to win, and I'm going to go out on a crazy-ass limb and bet that he wins with at least 350 electoral votes. But wait! There's even more! We're going to take back Congress. Both houses.

How can I be so wildly optimistic? Well, I'm looking at trends and subtext, and there are a number of reasons why I think so:

We're going to win, my friends, I promise. But, as with everything, there is a price to pay. That price? We can never become as complacent and detached again. The stakes are too high, and we are only stopping this disaster in action now, at the last minute, before big business and neo-fascists take away our American democracy for good.

I know you're tired — I am, too. But living up to the potential of our democracy is hard work, and your disinterest in it sends our leaders mixed messages, which causes them to fail. Remember what Plato said: "The price that good men pay for not being interested in politics is to be governed by men worse than themselves." It was true in Athens, it was true in Rome, and dammit, it's true here in the Good Ol' US of A.

Work your ass off the next two weeks, and vote for JFK on November 2nd, and let's watch this victory change the face of American politics for good, and for Good.
Three ImaginaryGirls.com wholeheartedly supports this report but opinions expressed are the author's and do not necessarily reflect opinions or policies of the girls {although, as igLiz says, "It doesn't necessarily not reflect our opinions…}"