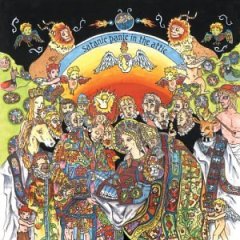 Satanic Panic in the Attic

Athens, GA has spawned some fun bands in recent months — Azure Ray, Now it's Overhead, Crooked Fingers (albeit now in Seattle) and the seven year indie-vets Of Montreal, who are back with a new record.

Satanic Panic in the Attic is the group's sixth full-length, and their first release with the delightfully consistent Polyvinyl Record Company.

SPITA (no, not an animal liberation movement, just an abbreviation for the album title) is a remarkably catchy record. It finds the band making the sort of music no one can really dislike. (In this regard I have heard them compared to Built to Spill and early Belle and Sebastian.) It's another record by one of those bands that you can take for granted as always putting out something worth purchasing — there's never any question.

This new album is a little bit of a departure from their previous work… etc… but then again it's always good for bands to grow yada yada yada… We've all heard this sort of thing before whenever a veteran band puts out a new record that doesn't sound exactly like the last one.

Really the album is just meant for summer fun. As cornily Beach Boys as that sounds, it really is. The tracks run together as a collective album more than as just a bunch of songs, and the songs are as colorful as the Sgt. Peppers-esque album cover. Somewhere in-between tracks two and three the band breaks into a fugal acapella harmony that then leads into the melting pot of influences they wear proudly on both sleeves and pant legs throughout the rest of the album: Punk, rock, grunge, sixties through today, new wave, there's a little bit of everything in it.

SPITA is spring and summer dancing foot tapping fun. It reminds us of why independent music survives, the clarity of it.