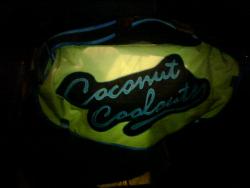 I don't feel like I'm a true Seattle indie rocker. In the near two years that I've lived here I had never been to the Funhouse until last Friday night. Fortunately, the Coconut Coolouts, Head and Thee Sgt. Major III were the bands fated to pop my Funhouse cherry.

With a name like the Coconut Coolouts, one might expect to see four slightly hair individuals donning grass skirts, pina coladas in hand, romping about onstage. They were definitely cool, and there was a banana costume involved… but sadly no coconuts. The Coconut Coolouts are an energetic mutt; equal parts Hawaiian surf, proto-punk and bashed-out garage rock. They thrashed around, amusing the crowd with their rehearsed between-song banter. The Amazing Bananas (in full costume) stole the show though, showing his true party spirit whilst still playing his instrument! The Coconut Coolouts' strength is their campy humor and their Stooges-riff Tiki party vibe. This is the band that you book for your keg party, coked-out stripper party and every cocktail party in between.

With an appropriately vile name, Head followed up the Coolouts with a cold shot of punk rock. Sounding a bit like Screeching Weasel grounded in fuzzy feedback and darker vocals, Head continued the party and readied the crowd for headliners Thee Sgt. Major III. Squealing punk vocals and big drums introduced the five-some to a crowded Funhouse. They were all sweaty energy, flipping off the crowd and indulging in perfectly executed guitar solos. Leslie Beattie hopped around onstage beating that tambourine to death, and the crowd loved it. Their hard-edged grimy sound was reminiscent of "Anarchy in the UK" era Sex Pistols, but that could have just been the whiskey neat that I'd been drinking on top of healthy doses of Pabst Blue Ribbon talking. The vibe at the show was straight-up punk rock and the bevy of party-goers that I lugged with me couldn't agree more, as they pushed their way to the front, shaking their asses all the way.

My first Funhouse experience was exactly what I'd been hoping for: a whisky-drenched party-punk blow to the brain. Friday night fixed everything that was wrong with my entire shitty week.. and I have these three wonderful bands to thank for that.

Quote of the night (as heard from someone onstage from Thee Sgt. Major III): "No shortage of barbs in this band."