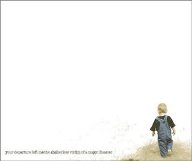 Your Departure Left Me the Shelterless Victim of a Major Disaster

The Colouring Season's EP, Your Departure Left Me the Shelterless Victim of a Major Disaster, contains four originals plus a cover of the Bangles "Manic Monday." Faisal Sethi, the driving force behind this project, wrote all of the EP's original songs. You may remember Sethi when he lived here in Seattle. He collaborated with several bands, including the Prom, during his stay. But, he has since returned to his homeland Canada and hooked up with So, Is She Cool? Music.

Apparently jilted in love, Sethi appears inspired to write while processing his heartache. Floating above the alternating acoustic/electric pop rock set, his voice sounds soft and whispery. There are moments, as on "Shoes for Free," when Colouring Season sounds like the the New Pornographers’ brand of mixing guitar, vocal, and keyboard, (minus the female vocal of the lovely Neko Case).

The Bangles cover is a bit forced, however, and probably best left for those drunken late nights at the karaoke bar. The slow songs wax more on the side of grating than poetic. I wanted to like Colouring Season more than I did, but after repeated listens it just didn't click, despite the bright spots.