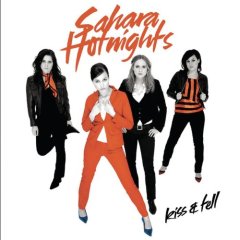 That the Sahara Hotnights could put out such a fine album, get signed to a major label (RCA), get a spot on Conan, and still be only between 22 and 24 years old is impressive enough. But considering that Kiss & Tell is their third full-length album, and is not even their best effort to date, gives away what a talented bunch they must be… Of course to get signed in the US it probably helps that the Hotnights are four young, cute girls, that they are from Sweden (which has been referred to as the 'new Seattle' in some quarters), that they play spiky, yet staggeringly melodic, upbeat punk-influenced rock. And it probably doesn't hurt that lead singer Maria Andersson is dating Pelle Almqvist of another hot band from Sverige — The Hives…

The Sahara Hotnights (named after a racehorse, just in case you were wondering…) first crashed onto the scene in Europe in 2000 with their fabulous debut album C'mon Let's Pretend. Getting some media attention for their upbeat, passionate rock songs, and gigs in support of the likes of Foo Fighters was pretty impressive — considering half the band were still but 17. Indeed, in an interview, Dave Grohl said he found going on after the Hotnights quite intimidating, since they were just so good live.

Now in 2004, it seems apt that the Hotnights are attempting to crash onto the mainstream US scene with a single entitled "Hot Night Crash" from their new album Kiss & Tell. Compared with their previous two releases, Kiss & Tell presents a slightly more mature sound. The 11 songs and ~35 minutes of succinct Rock 'N' Roll on this album comes across as more balanced and even tempered, with slicker production, and with Maria holding back just a tad on her acerbic vocal stylings, so plentiful on C'mon… and the subsequent Jennie Bomb.

While perhaps occasionally missing that little extra roughness and emotional edge of earlier tracks such as "Impressed By Me", "Downhill Race" and "Down and Out", Kiss & Tell still delivers a fine collection of songs of its own. Standout tracks include the new single "Hot Night Crash", "Walk on the Wire" and "Nerves". On some of these we also find the Sahara Hotnights venturing away from just good ol' rock guitar and out into some new guitar sounds and textures, as another sign of their gradual growth — like the jangly sound and fuzzy short solo on "Nerves", as well as the little guitar solo on "Walk on the Wire" (so reminiscent of the much missed Shadowy Men on a Shadowy Planet). Hell, we even find some keyboards creeping into several tracks as well — another first for the Hotnights.

So, finally, what is Kiss & Tell all about? Well it seems that at the ripe old age of 22+, it's about being on RCA and the Sahara Hotnights being given their chance to make it big in the US of A. It's about whether there's any room left in the girlrockandrollband space. It's about surviving the inevitable and likely never-ending comparisons to The Donnas. And, knowing how shallow the industry is, it will almost certainly also be about being Swedish.

For me — it's just about having another Sahara Hotnights album — and another damn good one than that. What more could anyone want than that…?