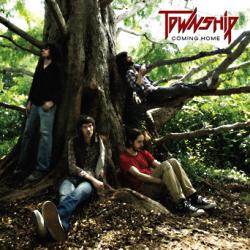 To listen to Township is to immediately be transported back in time. They sound like a 1970s rock outfit that you'd hear playing alongside the likes of The Who, Zeppelin, Skynyrd, Thin Lizzy, and other classic rock juggernauts. Three decades ago they might have blended in with the crowd, but in 2008, surrounded by a sea of indie rockers and computer-produced soundscapes, they stand out and dominate — in Boston, anyway, where a year ago they won the WBCN Rock 'n' Roll Rumble and have been on a steady roll ever since.

After releasing two EPs that contain many of their live show staples, they have finally delivered their debut 11-track full-length, Coming Home. Since its recording, guitarist Carter Tanton has departed to focus on his band Tulsa. His spot has been filled by Matt Smart, joining Greg Beadle on drums, John Sheeran on bass and Marc Pinansky on vocals and guitar. From the moment "Round the Dust" begins with its perfect rock 'n' roll intro, through the very last grooves of "With You All Along," this album is consistently masterful and thoroughly bitchin'. This is that CD that I want to buy copies of for all my friends, and that I think might make my dad finally trust my generation.

The songs fit seamlessly together and yet each is distinct. There are blues-y rockers ("Big Bad," "Sandy"), fist-pumpin' anthems ("Millions of People," "Highway"), epic sonic journeys ("Home," "With You All Along") and even a quintessential rock ballad ("Baby Rock Me"). You can tell that they've closely studied all the masters who wrote the books on rock 'n' roll. But don't assume that Township's story begins and ends in the sounds of others before them; though their influences are clear, so is their strength as songwriters and musicians, and their songs belong to them, nobody else.

Some of the most exciting moments on this album come in the band's remarkable song structures. You don't get verse-chorus-verse with Township; their songs on the whole are way more complex than that. "Sandy" is a good example: It begins with a simple A-B-A-B, throws in a C, and sees its way pretty much through to Z by the end, stopping by bridges, solos, and ba-ba-ba-ba-ba-ba-ba-bas on the way. Each song is a new experience and none will leave you unsatisfied or bored.

You can't help but sing along after hearing these songs just once or twice. At their shows, even in rural New Hampshire where I happened to catch them a few weeks ago, crazed fans fight their way up front to pump fists and scream along with every word. They are local heroes for the rock-starved.