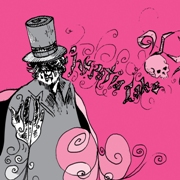 And We Shall Call Him Joseph

Hypatia Lake is a four man argument against lo-fi and for the return of headphone rock. On their second album, And We Shall Call Him Joseph, the band takes awesome sweeps of sound, flurried gusts of accelerated rhythm, and melting melodies to craft something both strongly experimental and pop-accessible (well, within reason). This is a concept album, a sequel at that, about a dispossessed rebel who shuts down his town's exploitative candy factory.

Recorded and with much musical accompaniment by Zack Reinig (known for his stricken collaborations with Blonde Redhead and Black Heart Procession) and sterling rock producer Dave Hills (Pearl Jam, Afghan Whigs) at legendary London Bridge studios, And We Shall Call Him Joseph repeats melodic themes throughout, between dropping them for bass-thumping wide-canvas murals ("Bridgette Fountainhead") and finally breaking open halfway through on the fuzz-chewing sea-monster rock of "The Paradigm of the Introvert." The sense of Alienated Seventies Teenager at the trail-tip of a particularly nice 'shrooms trip saturates all 44:11 time-chunk here.

Lead guitarist Jared Hill left after their 2003 debut Your Universe, Your Mind, but Dave Foley has replaced him on drums (?!). Foley is a gifted DJ and remix artist who adds more swing to the band's sound, an aesthetic "paradigm shift" for sure. This makes former drummer Randy Skrasek a focal point, wreaking havoc on guitars and keyboards and samplers and such. It's this sense of "swing" that raises And We Shall Call Him Joseph above other albums in its genre. Foley's ability to liberate Skrasek to go nuts turns this into an enormous field of sound-play that's properly and unusually anchored throughout. With that thought, more DJs should be drummers, and more drummers-DJs should join progressive rock bands.

* For the high-brow, Hypatia was a mathematician who was the head of the Platonist school in Alexandria, instructing from a Neo-Platonic viewpoint — that there is an ultimate reality beyond language or thought. Perhaps it's this dynamic tension between idea and expression, and art and entertainment, that makes Hypatia Lake compelling as a band.