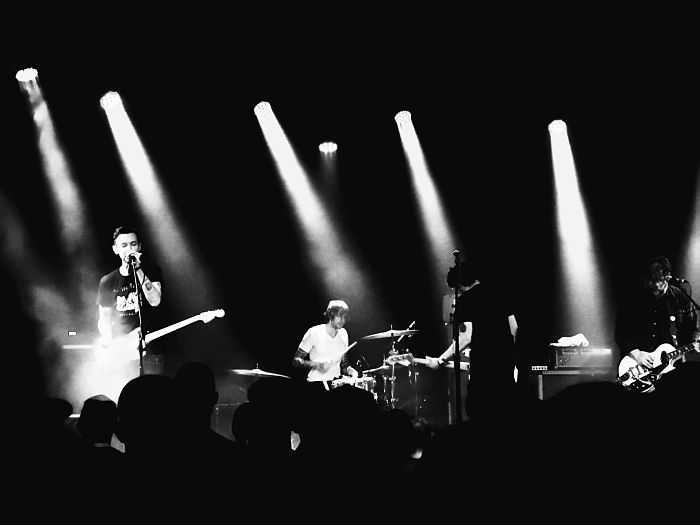 Concert Review: Sparta at The Crocodile

Sparta was launched by vocalist/guitarist Jim Ward with drummer Tony Hajjar in 2002 after the implosion of their previous band, At the Drive-In. Sparta went dormant around 2008, and in 2012 At the Drive-In stunned the music world by reuniting for a string of shows and festivals slots. Rumors of new music circled the web and a world tour was scheduled in early 2016. Yet on the eve of the tour, Jim Ward abruptly left the band due to creative differences only to have his Sparta bandmate, Keeley Davis, poached as his replacement.

Two years later, and still raw from his At the Drive-In exit, Jim is back on the road with Sparta for the first time since 2011. Bassist Matt Miller is the only other original member of the group, as both Tony Hajjar and Keeley Davis are pursuing At the Drive-In full time. Davis’ guitar duties have been taken over by Gabriel Gonzalez, who once toured with Sparta as a keyboard player in 2003. Hajjar has been replaced on drums by newcomer Cully Symington. Instead of packing the band with musicians from recognizable bands (Keeley Davis used to front the post-hardcore group Engine Down), Jim appears to have created a lineup of tight-knit friends.

The show took place at The Crocodile in Belltown, and after a quick set by local band Chrome Lakes, Sparta took the stage. It’s worth mentioning that Jim placed himself at stage-right instead of center. He is the band’s bedrock and vocalist, yet his position on stage announced that Sparta is still a collaborative group, a band and not a solo project. They surprised many by opening their first Seattle show in more than ten years, with the brand new barn burner “Graveyard Luck.” The next four songs were an even-keeled mix of material from each of Sparta’s records.

The first few songs came off a little nervous, even standoffish. The lack of banter with the crowd felt a bit awkward too. Though the material was well rehearsed and full of heart. About a third of the way through their set Jim finally addressed the audience. He adored Chrome Lakes and was excited to have discovered a new Seattle band. He complained of a hoarse voice yet still sounded excellent. His high notes were impressive, though he did sound strained with heavier songs that required shouted lyrics.

The band paid gratitude to everyone for showing up to a tour without a new record behind it. Jim said the purpose for hitting the road was because it’s fun, but also so the group could road test their new material on fans and keep tweaking the songs along the way. They went on to perform another excellent new track, “Cat Scream,” which showcased the experimental edge of new guitarist Gabriel Gonzalez.

Towards the end of the night, Sparta debuted one more new song called “Fight with Love.” Before launching into the song Jim announced it was written in response to the hateful political climate we’re living in. He said it’s about the impending fight that is coming, the fight we’ve got to win. The song, as its title suggests is a little too on the nose, especially with a chorus that just repeats “fight with love” over and over. It was at least a brief track, no more than two minutes, with its heart in the right place. Here’s to hoping “Fight with Love” keeps getting tinkered with out on the road.

The setlist relied heavily on Wiretap Scars material, easily Sparta’s most beloved record. “Cut Your Ribbon,” what many would argue as their signature song was noticeably absent. Yet the crowd was unphased. Sparta was obviously enjoying themselves on stage and chose to highlight some of their deeper cuts. They played no encore and left the room wanting more. And maybe that was the point. After a US tour and a pair of fresh demo tracks, a new album is obviously in the works.

The Most Vicious Crime