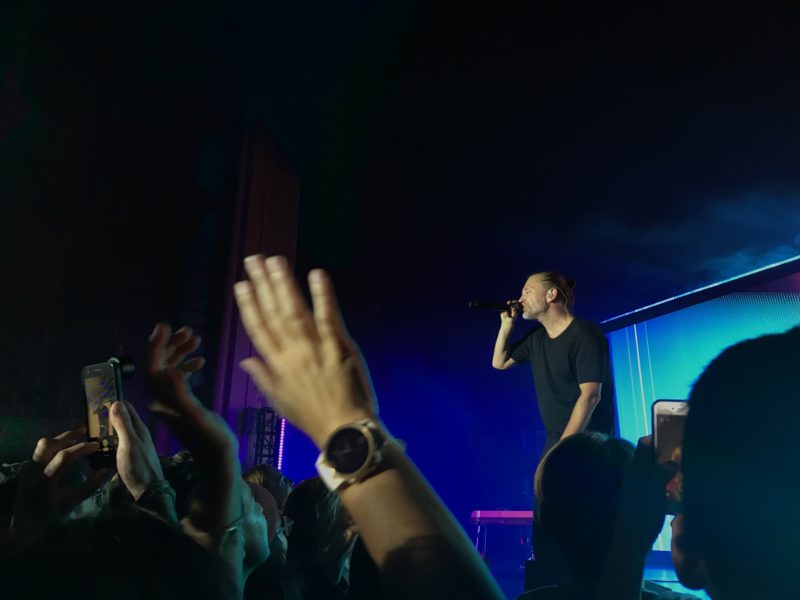 Thom Yorke’s had an incredible two years. Last year he scored his first film, the excellent remake of horror cult classic, Suspiria. Yorke’s soundtrack, put out by XL Recordings, is both unnerving and meditative. It was met with general praise from fans and critics alike. Then at the end of June, Thom Yorke dropped his best solo record yet, Anima. Likewise, put out by XL and heaped with adoration, the record was also accompanied by a short film directed by Paul Thomas Anderson on Netflix. On October 20th, Thom Yorke brought the Anima tour to the Paramount here in Seattle. The show sold out immediately after tickets went on sale months ago. Yet I somehow managed to score one of those mythical day-of-box-office-tickets at face value.

Andrea Belfi warmed up the crowd with an instrumental set. Belfi played the drums alongside a synth and what sounded like some backing tracks. He started out slow and I was a bit disinterested. But his second song won me over and I enjoyed the rest of his set. He was an excellent drummer and his synths were actually quite creative and felt pretty fresh. Andrea Belfi played for about twenty minutes, just long enough to pique the crowd’s interest without wearing out his welcome.

Thom Yorke took the stage shortly after with the sultry Suspiria standout, “Has Ended.” He was accompanied on stage by long-time Radiohead collaborator Nigel Godrich as well as Tarik Barri. Though Barri was not recreating the songs with Thom and Nigel, he was improvising custom visuals in real-time with software he created. The visuals were psychedelic, geometric, cotton candy-esque, and at times reminded me of old school scrambled television channels.

Radiohead tends to overplay the song “The Gloaming,” an otherwise forgettable track from their 2003 record Hail to the Thief. It’s become a bit of a tongue-in-cheek joke amongst fans. Whenever they play it the stage turns green with the spooky bass of the track’s intro. Diehards have a kind of bittersweet joy about getting “gloamed.” So when the stage went green and I heard some spooky bass coming at me, for a split second I thought I was getting “gloamed” for my fourth time and at a Thom Yorke solo show. I started laughing, but thankfully it was the excellent Anima track “Impossible Knots.”

Yorke played a few reworked songs from his first solo album, 2006’s The Eraser. His sound has changed quite a bit since then and it was impressive to see the older songs’ arrangements tweaked to better fit with the new material. Radiohead usually sticks to a song’s arrangement live, so it was really great to see Thom Yorke reimagine some of his older tracks. The set had a great mix of his solo discography. His previous album, the stark and cold Tomorrow’s Modern Boxes, got a lukewarm response upon release. But songs like “A Brain in a Bottle” felt so much more human and full of life on stage.

Yorke later snarled the opening lines of “The Clock”–“Time is running out for us / But you just move the hands upon the clock”—as he stared down the crowd, wiggling to the beat, silhouetted like a worm against a red backdrop. The disgust that an almost fifteen-year-old song about environmental collapse is more pertinent today was obvious.

It was a shock and a delight to hear the Anima bonus track, “(Ladies & Gentlemen, Thank You for Coming).” “Runwayaway” was another highlight of the new material. The repeated lines, “This is when you know who your real friends are” ad nauseam really stuck with me. So did “Dawn Chorus,” an almost spoken-word piano ballad that works as Anima’s centerpiece and quickly became a career highpoint for Yorke. Seeing that one live was worth the ticket price alone. It holds its own with Radiohead gems like “True Love Waits” and “Motion Picture Soundtrack.”

I’ve seen Radiohead a few times, but never Thom Yorke on his own. Each time I’ve seen the band was in an arena and I was pretty far from the stage. At the Paramount, I couldn’t believe how close to the stage I was in the back of the room. It felt really special getting to see someone as legendary as Thom Yorke in a medium-sized venue, and one that’s designed for musical performances too (looking at you Key Arena).

Thom Yorke danced his charming little heart out all night long. The set list had a great mix of deep cuts and fan favorites that made you want to groove as well as tear up. I especially appreciated how the set was closed out. We got the bombastic “Cymbal Rush,” into the calmer “Interference,” and concluded with the haunting “Unmade”—leaving us right where we started, with another pensive Suspiria tune.

I Am a Very Rude Person

(Ladies & Gentlemen Thank You for Coming)

A Brain in a Bottle

(if you’ve read this far, here’s a wee 3-second surprise)