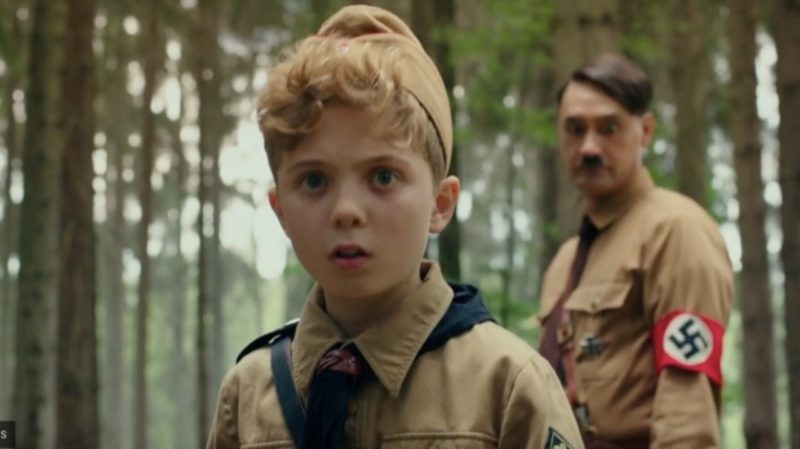 I’m 99% positive that if anyone other than Taika Waititi pitched making a movie about a young German boy who idolized Adolf Hitler so much that he made him his imaginary friend, the movie would never actually get made. But HE did, and so we have Jojo Rabbit, in which Waititi also plays imaginary Hitler.

10-year-old Jojo (the positively adorable Roman Griffin Davis) lives in Germany and goes to what is essentially “Boy Scouts for Nazis” with his second best friend, Yorki (Archie Yates, FOR REAL stealing every scene he’s in). After an unfortunate mishap with a grenade spurred by his imaginary first best friend  Adolf Hitler, Jojo ends up at home recuperating and discovers his mother, Rosie (Scarlett Johansson), is harboring a Jewish teenager named Elsa (Thomasin McKenzie) in their attic.

Thus, a dilemma: if he tells on his mother, he knows she’ll be imprisoned and probably killed. But how can he keep a secret this HUGE from everyone in his life and still be a good and loyal Nazi?

Things become more complicated when Elsa and Jojo strike a deal to help each other — him by keeping her secret; her by helping him learn more about Jews — and end up spending more and more time together until Jojo’s feelings become confused enough for him to question if Jews are really as bad as he’s been told.

Outside the house, he also has to contend with Captain Klenzendorf (Sam Rockwell); a retired-soldier-turned-teacher who may not be exactly what he seems; Fraulein Rahm (Rebel Wilson) — who mostly exists in order to drop ridiculous, yet true, statements about a woman’s place in the Third Reich; and Deertz (Stephen Merchant) and his band of investigators who are on the lookout for traitors.

Look, I have no idea how Waititi took a story about The Holocaust and made it into a (mostly) feel-good comedy, but holycrap did he succeed. I’m torn about movies that are so obviously constructed to tug at your heartstrings, but I can’t really complain about this one because even though it verges on twee, it gives you a big, bursting wave of HOPE.

Even in its darkest moments it never loses that feeling, and the last scene is one of the most pure and beautiful things I’ve ever seen on screen. It’ll stick with me for a long, long time.

I know this world is dumpster fire of awful right now, but at least this movie made me feel light for a brief couple of hours. Waititi’s excellent track record remains unblemished!

{Jojo Rabbit is screening in Seattle at AMC Pacific Place}