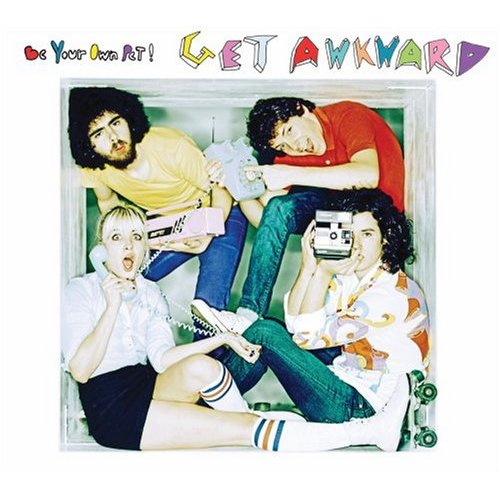 Be Your Own Pet

Here's a story we all know too well: about three weeks ago, Fluxblog posted a song that I fell in love with. I've listened to the song over and over again and bought the album it was to be on the week it was released, when I got home and uploaded it to my iPod I realized my song just wasn't there. "Whiskey Tango Foxtrot?" I wondered. Now I have the answer and you have no idea just how much it pisses me off.

The song, by the way, is "Becky" by Be Your Own Pet, and the album is called Get Awkward. It's still up at Fluxblog. It's about a typical high school friendship souring ("BFF and you're such a good friend, but I knew it couldn't last till summer's end") and turning to bloodshed. It's also really funny and catchy. With lines like "if only what you wrote in my yearbook was true, I wouldn't be stuck in fucking cellblock two" and backing harmonies that say, "we don't like Becky anymore," it is one of the most addictive songs I've heard all year. I guess in the post-Columbine era Universal Records doesn't believe their listeners are sophisticated enough to differentiate between cartoon violence in a song and actual murder. *Sigh*

…three Get Awkward tunes were removed from the album's U.S. version at the last minute, having been deemed too violent by Universal Records. (Universal releases Be Your Own Pet's albums through a deal with the band's U.S. label, Ecstatic Peace.)

"Blow Yr Mind", "Black Hole", and "Becky" all appear on the international version of Get Awkward, released by XL Recordings.

Yes, Universal, an imprint of the Universal Music Group, home to such family-friendly artists as Eminem, 50 Cent, Marilyn Manson, and (formerly) Nine Inch Nails, thinks these songs are too violent to be heard by American audiences.

Oh and to add more irony, P4K says, "Be Your Own Pet are on tour in the UK and Europe now, with plans to tour America this summer with She Wants Revenge, whose breakout single 'Tear You Apart' concerns wanting to tear your hair out and 'fucking tear you apart'. Wanna guess what company put out that record?"

"Becky" is streaming on BeYourOwnPet.net and there are, apparently, plans to release all three censored songs as an EP this summer.

Here's some YouTube-age of the offending song. It's a live video and the audio is far from perfect. I'd also embed the video to their single "The Kelly Affair", which is pretty great, too, but Universal disabled the embedding on YouTube. Seriously guys, you're making it difficult for me to write about a band I really like.

Hat tip to Megan at Lineout.