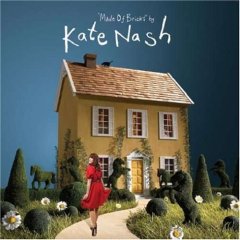 It is very difficult to get past two things when it comes to Kate Nash:

"Foundations," by itself, can almost carry the weight of her U.S. debut Made of Bricks and really, Kate Nash is what she is: a pop singer. She dabbles in the 60's soul revival sound like the Pipettes like on "We Get On," she gets a little more modern on "Mouthwash," driving along with her piano and warbling voices. However, she pretty come across the same way in every song: cute, charming and vulnerable.

Sure, she can take some revenge on her head like leaving the heat off when they pass out drunk, but she still comes on back to him. Kate Nash has just really figured out how to write a great pop song that isn't too grating and maddening after repeat listening, which, in itself, is a talent that few possess. I suppose there are a lot of people who will abhor Kate Nash for her quirky-but-mainstream style, but I can't get past the infectious nature of her music.