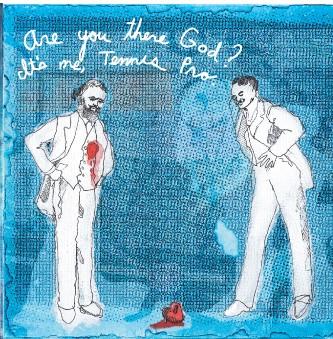 Question: What makes us happier than a new Tennis Pro record?

All those answers lead up to very happy peeps here at Three Imaginary Girls. Not only do Seattle powerpop band Tennis Pro have a brand new record with a fabulous new title (Are You There God, It's Me, Tennis Pro), but they also have a fabulous CD release show this Saturday, March 29th, also featuring Iceage Cobra, Bad Love Sessions, and the Whore Moans, at King Cobra.

But wait, there's more! The record also had some delightfully juicy drama associated with its release, featuring censorship much like the Judy Blume book has received over the years.

“The thing is, a CD already looks like a boob,” said Tennis Pro bassist Phil Peterson in response to a regional duplicator rejecting the order that was initially approved – a pencil drawing of a woman lifting her shirt, to be printed on the top of the CD. “This guy prints boobs every day, all day long. So the fact that he won’t print a boob on another boob just makes him look like a hypocrite.”

The image in question was from a pencil drawing entitled “Nice Rack (for two kinds of hunters),” which juxtapositions a deer with antlers above the image of a woman pulling up her shirt. (Artist) Dawn Cerny is currently showing at The Henry Art gallery (Seattle) with her collection, “We’re all going to die (except for you).”

Multiple duplicators refused the job, forcing the band to scramble to print the CD in time for release. Tennis Pro CD release party for Are You There God? It’s Me, Tennis Pro is still scheduled for Saturday, March 29 2008 at King Cobra with Ice Age Cobra and The Whore Moans.

Ironically, the album’s title is a play on the title of the famously censored Judy Blume book Are You There God? It’s Me, Margaret.

Here is the cover art I found on MySpace. Looks like the same artist, but not the same controversial image?

Speaking of MySpace, you can hear two new tracks from Are You There God? It's Me, Tennis Pro, "Small Shorts" and "With Kindness," over at the band's MySpace page.