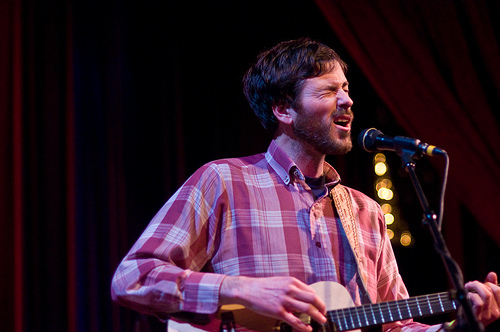 Happy Monday, imaginary friends! We're here bright and early this morning to start the week off right: there's just two weeks until our annual Holiday Spectacular {taking place on Friday, December 21st at Chop Suey}, and that gives us just enough time to get you as excited about the bands taking the stage as we are. Off we go!

First up, a familiar face: Chris Otepka of The Heligoats. If you think you recognize Chris from last year's party, you're right — we adore him so much, we had to have him come and play for us again this year! We've waxed on and on about all the things we love about Chris, from his quirky songwriting perspective to his charming, bard-like delivery. If you know his sound, you know why we're so excited to have him back for this year's lineup — and if you don't, check out some of his internet on his Facebook page, and then come to the show early and catch some of his beautiful deliriousness for yourself. Chris will be taking the stage second, after our show openers Brite Lines.

{Superfans, take note: The Heligoats have a new album in the works! It will be available in February, so keep your eyes here for release details and supporting tour dates.}

Brite Lines is fronted by our pal Zach Gore, and even in the band's simplicity, they span such a wide array of adjective from song to song (as evidenced on this year's EP Make Shift) that they're hard to sum up in a few short sentences. The music is earnest, rooted in New America; part haunted songwriter; broken-hearted and hopeful, with an all-encompassing catchy post-indie rock folk vibe. Somewhere between the pain of breaking up with your last girlfriend and the day that the sun finally shines through the clouds on your face lies your allegiance to this band. We've linked to Make Shift above, and at a buck a song, you might do yourself good to pick up a copy — they're individually labeled, stamped, and hand-numbered (and we seriously have no idea how they're not sold out already).

We'll have more features on the bands for this year's Holiday Spectacular soon, so stay tuned! And if you haven't done so already, pick up tickets for a mere ten dollars here, and pop on over to the Facebook invite here. 3