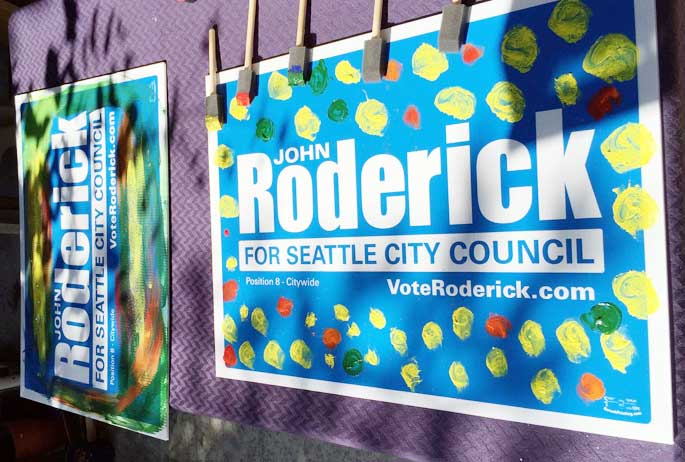 By now everyone should have received her/his primary election ballot in the mail. It’s of the utmost importance that you vote! Mailed ballots must be postmarked by August 4 or you can drop off your completed ballot at a ballot drop box or scheduled van drop.

Below is imaginary liz’s opinion on the primary race for Seattle City Council Position 8.

John Roderick has been a diehard friend of Three Imaginary Girls since the beginning. The idea of TIG was even born at a Long Winters show back in 2002.

Since that night we’ve covered countless bits of John Roderick news (at last count in 2012 there were 710 mentions of the Long Winters on the site – I still think that’s a lowball number) and John has been kind enough to be our Indie Rock Santa at nearly every one of our holiday parties.

I am sharing all this with you because John Roderick is running for the city-wide seat on Seattle’s City Council (Position 8). It’s a position that all of Seattle votes for (not just a specific district).

Of all the candidates running for this office, I believe John is the candiate that will fight the hardest for a better Seattle.

He’s such a determined and tenacious force, I’m convinced he’d actually fight even harder for Seattle’s future than I ever could. John has done his research, with a strong knowledge of Seattle’s history and the many dimensions of its residents. This keen understanding is what it takes to move Seattle forward and enhance the lives of those that live here.

No matter what issues are most important to you, those are items for which action will (or should) be taken in the next City Council term: transportation, environment, housing, livability, public safety, the arts, unemployment, corporate growth, high-speed internet for all, police reform, the welfare of our kids, elders, and those in need.

John is intellectual and discerning while at the same time innovative and compassionate for the less fortunate. He’s not intimidated to have tough conversations or make tough decisions.

John will be out and about town in the coming weeks so there are plenty of chances to find out more about John’s campaign (and ask John some tough questions).

The most notable and biggest event of the campaign will be:

Connect with John at one of the below informal meet-and-greets with voters. At each of these short FREE get togethers, there will be special musical guests also taking the stage. Get more info and RSVP via each link below:

Wednesday – 7/29 at Capitol Cider (Cap Hill) 5-6:30pm –
This event at Capitol Cider is presented by Three Imaginary Girls!
Imaginary Dana will be at the event and introduce/perhaps speak at length about John for City Council.

There are a lot of more politically savvy articles and articulately stated endorsements for John Roderick and about his candidacy out there. Here’s a very small sampling of them:

• The Stranger
• Think Progress
• Seattle Times
• JessFish (if you’ve gotten this far in this op-ed, I think you’ll enjoy this link the most)

And here’s an article he wrote, published on Geekwire:
Commentary: Seattle needs new political leaders who get tech, but aren’t running Windows Vista

Want to learn more? Dig into all things VoteRoderick by digging into the #VoteRoderick hashtag and twitter feed and facebook page.