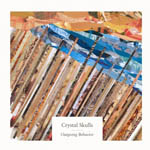 Twelve months after the release of their debut, Crystal Skulls have returned with their second full-length, Outgoing Behavior. The latest explores experimental sounds mixed with refinement — seemingly a contradiction — resulting in 30 minutes of studio-tight yet spacey bliss.

As on Blocked Numbers, singer/guitarist Christian Wargo wrote all of the material — and from the psychedelic tinge to many of the new songs, it appears as though he's going through a bit of a Flaming Lips and Wings phase. As my guy described it, the guitar work on Crystal Skulls' new album sounds like what Wings would have been had George Harrison joined his fellow Beatle in the lineup.

The Skulls also get funkier on this album, which is percussively spirited throughout. "The Hold Up," a dance tune that also features dueling guitars (ie, Stella's dream come true), could easily be remixed for an extended 12" dance-hall hit. Likewise, the fantastically dreamy "The Cosmic Door" exudes a buoyant glow. "Baby Boy" is the strongest track of the lot, with its Smiths-ish gloomy lyrics atop cheerful, unassuming melodies. Likewise, the guitar and piano harmonies on "Hey, It's Easy" are heartachingly bittersweet: minor chords married to rock rhythms and handclaps to pull the track away from all tears-in-beers sorrow.

Track on track it may not be as strong as its predecessor, but there's a confidence in this album that I didn't sense on the debut, and it swaggers its way through Outgoing Behavior.