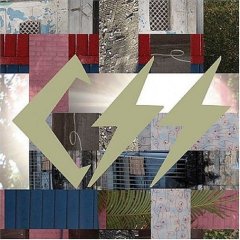 Let's play a game of time travel. Slide backwards through time to the year 1-9-9-0 A.D. You're in the city of Seattle and you stagger (disoriented by your time journey) into the offices of Sub Pop Records. What do you find? Vinyl records lying around? Flannel? Grundge bands lingering in the hallway? Very likely. You know what you won't find? I'll tell you what: Brazilian synth pop.

Flash forward a mere sixteen years and two Bushes later, and we find ourselves in a brave new world where it makes perfect sense that the venerable Sub Pop is going around signing tropical dance bands (thank you very much, Postal Service). Thankfully, CSS's U.S. debut Cansei de Ser Sexy is actually pretty darn good in a dirty fun sort of way.

CSS is spawned from the same indie well as Le Tigre, the Faint, and other minions of the neo-New Wave of the early oughts. They have quite an attitude, manifested in snarky lyrics, quick and dirty synthesizer lines, and a generally playful attitude tinged with downright dirtiness. Heck, on "Art Bitch" we all enjoy such classic lines as "Lick lick lick my art tit/suck suck suck my art hole." Ah yes, at least they have a good grasp of the English language! And if you want more, look no further than their Depeche Mode-inspired "Fuckoff Is Not the Only One" or the funky "Let's Make Love and Listen to Death from Above." The latter dances back and forth from a sort of loose LCD Soundsystem vibe to more of the snarling neo-goth of the Faint, but in either case, you're probably enjoying yourself, whether it be on the dance floor or, you know, chained to the wall with whips and a collar. You almost feel guilty listening to Lovefoxxx's vocals on tracks like "Alala" which, on one hand, sound incredibly innocent, but on the other hand, make you think very bad thoughts.

One of the standouts on Cansei De Ser Sexy is about Paris Hilton (which seems like a perfect fit for CSS) with its rousing chorus of "the bitch said yeah", surrounded by a soundscape of throbbing 808's, oddly fairy tale like synthesizers, and growling guitars. It's not entirely clear whether CSS really likes or dislikes Ms. Hilton ("I want to be just like you, bitch" — "bitch" seems to be a favorite word 'round these parts) but if you were really disappointed by Paris' recent album, you can always take refuge with this gem. "Meeting Paris Hilton" and the other standout, "Music is My Hot Hot Sex", make Cansei De Ser Sexy a welcome addition to any questionable record collection. "Music is My Hot Hot Sex" is more innocent than it sounds. It's actually an homage to the central role of music in the lives of CSS, starting with an obvious musical nod to Nine Inch Nails' "Closer" (and again, you feel like maybe you shouldn't be listening to Lovefoxxx seduce you with her vocals, lest you face potential charges).

Yes, we've come a long way since the heady days of Nirvana, Mudhoney, and L7. While back in 1990, the idea of CSS on Sub Pop would be the audio equivalent of the label saddling up with Flock of Seagulls, the old cool is back to being the new cool. Cansei De Ser Sexy is an entertaining, albeit a little fluffy, album that adds depth to the Sub Pop roster (you know, just in case indie labels have to face off on the playing field).

If you're feeling a decided lack of "dirty" in your life, CSS is waiting for you right now, bitch.