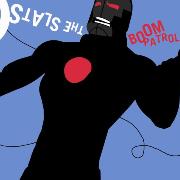 Like the sonic equivalent of doing 3 cans of whippets and then cracking open the aluminum to get at the sweet sugary liquid still inside, The Slats blend equal parts spastic, stuttering hyperactive goofiness and unrelentingly sugar-high inducing pop chops to remarkable effect on their newest release, Boom Patrol.

Veering wildly from genre to genre between and even within each song, the Minneapolis three-piece creates a potent mélange that vividly calls to mind artists as diverse as The A-Frames, Drive Like Jehu, The Cars, Devo, Captain Beefheart, Brian Eno (when he stilled rocked), Weezer, Ted Leo, The Breeders, Gary Numan, Mudhoney, The Knack, Fugazi and The Beastie Boys. I know that's a looooooong list, but seriously, that's how much is going on here.

Songwriters B. Cox and J. Hansen deliver wonderfully twisted monologues of equal parts comic book and video game geekery, gleefully misanthropic social commentary and knowingly brain-dead big hooks, channeled through the vocal stylings of Numan and Ocasek. There's even one song where they veer off into Rage Against The Machine territory, which is either meant to be supremely ironic or just a big fat middle finger in the face of someone who said that doing that would be lame. Either way, it takes equally massive cajones and talent to cover that much ground on an album and still have it come across as a consistent piece of work and The Slats have both in abundance.