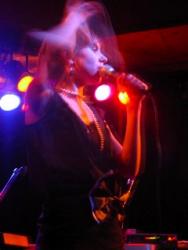 The Trucks CD release show at the Croc

We imaginary girls have found a new favorite Bellingham band, this time in the form of a quartet of sassy gals who have a DIY fashion sense and coy gusto to match. In short, The Trucks have been rocking our bumpers as of late.

The Truck's self-titled debut album is chock full of songs that combine equal parts The Bangles, The Catch, and Peaches to bring out our inner sultry-sultana. Overtop the snappy drum machine and 1980's futuristic synth lie infectious, if overtly seductive, quips that empower the Suzie Quatro in all of us.

The album's track closest to our hearts (and not just because of the name), "Titties," employs beguiling whispers and screams of the timelessly quotable line "How come you think we can f*** just because you put your tongue in my mouth and you twisted my titties, baby."

I first caught the Trucks back in May, also at the Crocodile, and just like last time, I was captivated by the frenetic energy of co-frontwoman Kristen Allen-Zito. She's an incredible almalgamation of a Rid of Me-era PJ Harvey (scrawny, overt, but sexy as hell) PJ Harvey, Rachel Griffiths (circa "Muriel's Wedding"), and maybe a splash of 1999-era Prince (or at least Wendy and Lisa).

She's brash and frantic and eager and yet at times also awkwardly vulnerable (case in point: when she stopped the show to ask if anyone had an asthma inhaler she could borrow mid-set). She's a paradox and a hurricane, and with her deft songwriting skills and mad skills onstage, she's got the potential to go supernova.

Frantic, frenetic — I was feeling winded just watching her spaz to and fro. She's got the giddiness and enthusiasm of a lil puppy who's just been asked if he wants to go out for a walk. The ferocity of her zest was nearly frightening.

I don't blame you. She's clearly a force when she's up there. But don't be scared. She's nice! They all are, including Marissa's parents, who were also at the show. How cute is that?

I felt proud as well. I (likely like Marissa's parents) find the song "Titties" empowering. Really, f***ing in a car and titty twisting are perfect euphemisms for everyday occurrences. For example, why does someone think I can talk to them on my cell phone while I am at my dayjob just because we had a drink together at a bar once? Oh, I do love that song on so many levels.

And at the show they introduced their very own Trucks dance move to accompany their song "3AM." The back-up vocals supplied by bassist Famously Funny Faith on that song are smooth 1920's showgirl-esque and mix perfectly with the coy rapping of "You are in luck because we are the ladies of the trucks… Need a push / Need a puuullll in" supplied by co-frontwomen Kristen and Marissa.

What Mom wouldn't love the Titties song? Really, what human with ears wouldn't??