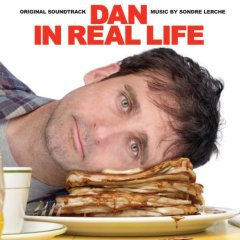 With all the talk that Juno has inspired on the topic of film soundtracks overshadowing the film itself, it's refreshing to come across Norwegian pop songwriter Sondre Lerche's collection of tracks for 2007's Dan In Real Life. The 11 original songs serve their intended purpose as backdrop for the film's story, making use of acoustic guitars and keyboards, sparse instrumentation and slow swells ("Dan In Real Life"; "Family Theme"; "Dan And Marie Picking Hum") and picking up the pace when the film itself takes action, like in the final scene's "Dan And Marie Finale Theme."

But some of these songs are great to listen to on their own, most notably the lazy and lilting "I'll Be OK," which could do double duty on both a long summer evening or an early autumn morning. Lerche also covers Pete Townsend's "Let My Love Open the Door," an acoustic guitar and violin rendition that more than makes up for Steve Carrell and Dane Cook's performance of the same song in one of the film's pivotal moments. "Hell No" is a relaxing, lounge pop-esque number that sees Lerche team up on vocals with Regina Spektor.

And for those who have seen the movie, I was excited to find the bonus 17th track of the cast singing "Ruthie Pigface Draper," a fun ending cap to an otherwise very worthy soundtrack.