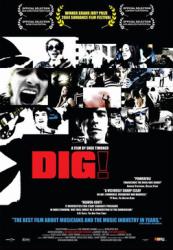 "Jimi Hendrix and Janis Joplin became addicts AFTER they were famous."

Dig!, a documentary film by Ondi Timoner, won the Grand Jury Prize at last year's Sundance festival. And it is a crowd pleaser–essentially a long, polished rock video meets Behind the Music. Over seven years' time, the filmmaker followed the career arcs of two west coast bands: The Brian Jonestown Massacre and the Dandy Warhols. More specifically, his film follows the choices and behavior of the two principal band leaders: Anton Newcombe and Courtney Taylor, respectively. Taylor and the Dandys put in hard work and eventually reach international stardom. But this film is not really their story. The bulk of this movie, for better or for worse, is about Newcombe and his repeated attempts to sabotage his own chances at rock and roll fame: a nasty heroin habit, and a tendency to berate and sometimes violently attack his bandmates and audience members.

Newcombe is presented as a self-styled prophet, someone too deeply in touch with whatever it is that makes one an artist. He makes an eloquent speech at the beginning of the film about starting a musical revolution. A parade of industry people lionize him and his music, one even calling him a "potential Bob Dylan." Musicians, including the Warhols, praise his music and proclaim him and his band as influential as the Velvet Underground. All well and good. But the film barely introduces us to the music of the Massacre, and when it does, the music seems solid yet uninspiring. It is the fall of Newcombe, the wasted possibility he represents, that is on display. (To be fair, this is a documentary, and the medium is notorious for presenting an edited reality that is really just the filmmaker's own viewpoint or their effort to tell a good story. Newcombe, of course, has come out publicly to criticize the film's portrait of him.)

The Warhols are presented in contrast. They use drugs, but not to excess, and seem to pull it together when needed. But Taylor and the band are also portrayed as superficial. At one point, the director of one their videos complains about Taylor harassing him on the phone about the way he looks in the video. The sole woman in the Dandys, Zia McCabe, appears in a hundred different shots and has different hair in each one. And yet, they are successful. Is superficiality rewarded by the music industry? Or has the marketplace recognized the Dandys as the better music-makers? Did the Warhols make it because they displayed a humility and work ethic that Newcombe and the Massacre lacked? Or were they just lucky?

At one point, Newcombe and his bandmates write songs making fun of the Dandys, and try to create a rivalry between the two bands. Were they just jealous of their success? Or were they being media-savvy? Regardless, the contrast of the bands does bring up many questions about the nature of art and art-making. Do you have to be fucked up to be a true artist? If you become successful does that mean you have sold out? Is being an artist and not playing the game just an excuse for being afraid of success? Can you be a real artist if you have no impact on the culture … or if no one hears your music?

While this documentary is successful at presenting some age-old questions about the nature of art and music, it is not very successful at telling a human story: the portrait of Newcombe and his music is too distant — we never really get to know or understand him — but perhaps that is the point. I struggle now to remember him from scenes in the film…all I am left with is memories of drugged out eyes and delusional ramblings, and the image of him kicking an audience member. I left the theater without any real sense of the lost potential of Newcombe. Instead I left the theater humming the lush, pop perfection of the Dandy Warhols. Perhaps that's the point of the film as well.