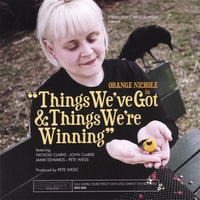 Somehow, Salem, Mass. band Orange Nichole has evaded my radar despite being tied in to a scene that I'm pretty familiar with, but thanks to my new job at the same company that Nichole herself works for, I'm in the dark no more. The band's 2006 release, Things We've Got and Things We're Winning, is cute indie-pop (OMG look at that cover! What could be cuter?!) that stops just shy of being so damn sugary sweet that you want to throw up (see: The Icicles).

Visit Orange Nichole on MySpace where you can listen to several of the album's songs and even download a couple of live numbers. If you love it, you can buy the album from CD Baby. I really like the quirky "The Money Song," which is not available on MySpace but is the song from which the album's title is drawn.