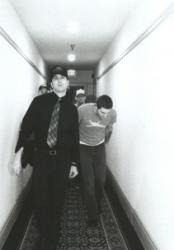 Have I told all of you how much I love the Cafe Venus/Mars Bar? That place rules. I love me the Mars Mac and Cheese and the Note of this Earth (N.O.T.E.) pizza and the Space Monkey Salad. I heart all the rocker-tattooed customers and laid-back bartenders, as well as the no-nonsense stiff drinks they pour. The owner, Katy, is not just super cool but is also a long-time supporter of all things imaginary.

I've recently discovered it's a great live shows venue. The cozy showroom feels intimate and warm, almost like you're sneaking a glimpse of the band playing at their friends' place, or at a really good practice — much like when you used to stay home from school to watch The Price is Right even though weren't sick {Shhh… don't tell my Mom}.

Ahh… Bob Barker. There is nothing like a "Showcase Showdown" to make me smile.

Like when, a short while back, a whole gaggle of imaginary girls and friends went out to see our first Mars Bar show? It was my first official Tennis Pro show and The Reluctants opened up. Gosh that was fun… but…. we never got around to reviewing it. That sure was lame. Sorry 'bout that.

That was totally lame. 'Cause I know three things that this imaginary girl loves: Tennis Pro, the Mars Bar, and wearing tennis gear while drinking gin. What a great night that was!

Yes. Both bands totally rocked, and we never reviewed it. It's one of those sad imaginary omissions that wakes me up screaming, sobbing regret into my pillow, in the middle of night. I wasn't about to make that same Mars Bar mistake twice.

To prep, my party and I got there early to charge up on some Cafe Venus nummy goodness. Once full of nourishment {and, yes, stiff drinks and ten imaginary "hail-marys" by way of atonement}, we moved over to the Mars Bar portion for the Dorkweed show!!!

Dorkweed! Wonderful, nearly-legendary-in-this-town Dorkweed, who I interviewed for our Coffee with a Rockstar interview column eons ago, whose past release "Fluxivity Test Project" was a mainstain in my CD changer for months, and who has knocked us out at various imaginary karaoke parties on numerous occasions…

In contrast, their live performance was… so much… well, louder. While the Mars Bar provided an intimate neighborhood feel for Tennis Pro, it sounded more like band practice in a non-sound-insulated garage for Dorkweed. With the cement floors and hard tables and hard-hard-hard surfaces everywhere, Dorkweed rocked every edged corner and crevise. The music was heavy on the drums {one full kit plus one cocktail kit}, heavy on the high frequencies and heavy on the cymbals. The resulting noise reverberated us to the core, until my poor imaginary boy friend cited literal tensor tympani turmoil and stepped outside.

Don't get me wrong, imaginary readers. I don't want you to think Dorkweed sounded bad. Quite the contrary — they were great.

I'd always imagined that frontman Brent Amacher was one of those one-man-band guys who wrote and played the songs and was the overall boss of all things Dorkweed. I was so wrong.

Dorkweed live were cohesive; they blared with raw, intense musicianship and talent; they resounded with decisive power and ferocious hooks. Dorkweed rocked so hard, they needed {and had} two drummers. They just needed to play a larger venue so there was some place for all that sound to go, other than pounding into our throbbing, unprotected eardrums…

Since the show, I've been listening to tracks off the up-and-coming Dorkweed release "S.A.D. (Sometimes Animals Die)", which is due out in mid-July (and with a CD release party at the Sunset with Dirty Birds and Laslo). Like previous Dorkweed releases, the songs are quirky-pop and cover not oft-discussed topics in the indie world {such as Duck Hunting and Creamed Corn}. In fact, might I suggest you have some delish sweet potato fries and creamed corn at Hatties Hat {down the street from the Sunset} before heading over to the CD release show?

For as we have learned from this experience, Dorkweed live to Dorkweed recorded = less wack, more rock. You should taste both. And the Mars Bars macaroni and cheese. And creamed corn.

Oh – also of note: Emblematic, a local four-piece, opened the night with smooth male vocals, indie-rock guitars, and likeable pop-sensibilities. I'd never heard of them before, but the nice retro poster designs on their website indicate they've been playing out for many months, mostly at the Mars bar. Place 'em on your local music radar.