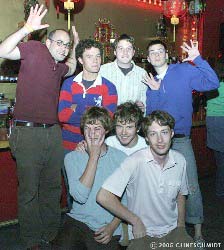 We thought it was a perfect pairing when we saw that the Elephants and Boat on the same bill together back in August at Chop Suey {read all about it}. Their DIY style, their jangly indie-rock guitars, their cute boy-next-door charms, and their love of pudding. So why not have them sit down and interview each other in the name of being imaginary in anticipation for their back to back September shows? Yes, why not.

Below we've got D. Crane, Boat frontman interviewing the Elephants. Want to see the tables turned? Read what happened when the Elephant boys interviewed D. Crane.

Boat: You guys are all multi-instrumentalists. What instrument that you cannot play would you most like to play?

Boat: How do you think Seattle and Tacoma are different in terms of both music scenes and restaurants?

Trevor: Tacoma kids are dirtier and dance more (a lot more). It is a small scene compared to Seattle, but there are a handful of really awesome bands and artists. There is no hipster oriented scene down here; just a bunch of dorky music-heads listening to and playing whatever music feels good. We like it.

Boat: We love your songs so we sang along to them at your recent show. What is your favorite song to sing along to in the car when you are driving north to Seattle?

Boat: Who in the band is the most likely to play in a dress?

Trevor: Definitely Jason (he's been known to do that at recent shows), which is funny because he is the manly one in the group. We are very in touch with our feminine sides. I think it shows in our music.

Boat: How did you meet….when did the band begin? What was your first song? Do you still play it?

Trevor: Jason and Cody have been good friends for a long time. I met them about three years ago when I moved to Tacoma. We are all singer songwriters and were fortunate with a large studio space full of instruments to bang around on. One night at a karaoke bar we all got it into our heads that while none of us were really great musicians, we could fake our skills enough to pull off a live rotating trio of diverse song styles. Our first song ever was "Cereal Song." It’s been a while since we've played it.

Boat: What has been your favorite show that you have played and why?

Trevor: That's a hard one. One of our favorite shows was at The Manium in Olympia. Half way through our set everybody started jumping onto the stage and dancing around us like some kind of 1960’s freak-out party. All of our equipment and mics were bouncing up and down. Everybody was good and sweaty at the end.

Boat: If you could play with any band…who would it be?

Boat: What are your guys' future plans this fall? Are you repressing the album?

Trevor: We are going into the studio during the next couple weeks to record seven new songs. I think we’re going to re-release the album with half of the same songs, along with the new tracks.

Boat: If you had to choose one band member to leave behind in an emergency who would it be and why?

Trevor: Like the marine corps, The Elephants leave no man behind.

Boat: You guys switch instruments quite a bit. Do you have a favorite instrument for writing songs?

Trevor: We all write mostly on guitars and keyboards. Sometimes tambourine.