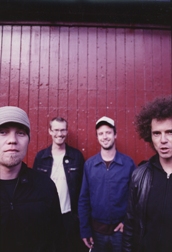 {Imaginary writer Stella recently had to opportunity pick the brain of Rogue Wave‘s frontman and songwriter Zach Rogue. What follows is a prime example of what happens when you send a musician questions via email and they answer on their “downtime.” Sarcasm, or all truth? Insightful, or completely goofy? You decide for yourself, but we’re pretty sure you’ll giggle.}

Our Q&A’s usually take place in coffee shops and are called “Coffee With a Rockstar.” What’s your drink of choice?
Hot cup of coffee, black. Maybe throw a shot in there if I’m moving slow from a night of too much reveling.

I understand that you wrote the new material as a band, as opposed to the process for Out of the Shadow, which was pretty much Zach’s material. How did the group come together in the first place, and what was it like working more collaboratively this time around?
The band didn’t write the material on this album, I did that. But we did share ideas with respect to arrangements and counterpoint melodic structures, that sort of thing. And clothing coordination. We have started to get some of the same clothes, so it takes some communication to figure who will wear which shoes on which day. It can be maddening at times. Oh, the pain.

Speaking of the band, how did you come up with the name Rogue Wave?
A rogue wave is a scientific mystery of sorts. It is a devastating event that can wreak havoc on ships, swallowing them up. To me, it’s come to be a metaphor for what is unknown, what can never be known.

Rogue Wave strikes a balance between lulling, gentle tunes and dark, uncomfortable sounds. But somehow that dissonant stuff sounds pretty too. How do you do it? And where does this tension/release come from?
I found it in a cereal box, actually. Back in the late 80’s when Cookie Crisp came out, they were running this promo campaign where if you bought 10 boxes of Cookie Crisp, you send in the cutouts from the back of the box, and they send you a rebate for a tension-release mood watch. It’s cool because it glowed in the dark. A lot of kids used to wear those Swatch watches, but I liked my tension-release watch better.

Kind of a cheeky one here. Anyhow, what’s the fascination with birds? (“Falcon Settles Me,” “Descended like Vultures,” “Bird on a Wire”)
I like cheeky. Not from Brits so much, but with Americans, cheeky is pretty all right… I don’t know. I hadn’t thought about it until you asked.

Oh yeah, I was raised by birds!

I once heard your band described as the perfect Oakland band. What do you think classifies you as such?
Well, for one thing, I am a huge A’s fan. Secondly, I am a third generation-born Oaklandian. Third, I have no idea what a perfect Oakland band means.

I read that many of the songs on Descended Like Vultures were inspired by touring — portraits of characters on the road and such. What is it like for you to be on the road so often? Do you miss home or enjoy the different-city-every-night factor?
There are things I like about seeing new places. I love Chicago and New York. I love driving through Iowa (seriously, it is beautiful). I like playing the whoever-guesses-the-next-song-on-the-iPod-gets-a-free-beer game, and I love meeting people who play in all these different bands. I love seeing some familiar faces when we come to a town we’ve been to before. I love smuggling iguanas across state lines. I love remaking that scene in “Teen Wolf” when Michael J. Fox’s character surfs on top of the van. I love painting my nails with black Sharpie pen — that’s always a sign that I’ve started to lose it.

Who’s in your iPod right now? And/or who would make for your ideal touring partners?
There are like 9,000 songs in my iPod right now. My iPod’s name is Dolly Podda. As Beck has described her, she is “whimsical, tragical beauty.” Been listening to the new Animal Collective, Chad VanGaalen, Eugene Mirman, Broadcast, Stevie Wonder, Kool Keith, The Who, Chet Baker, Wormser from “Revenge of the Nerds”, Biz Markie, Adam and the Ants, Echo and the Bunnymen, The Wipers, Toucan Sam, Lars von Trier, Winona Ryder, Emo Phillips, a complete set of dictionaries, The Magic Numbers, a lot of player-haters, a lot of hat makers, Makers Mark, Mark E. Smith, Yo La Tengo, and that record Will Oldham did with the guy from the Dirty Three.

Ok, last question: You’re on “Jeopardy” — what are your ideal six trivia categories?
Oh, that’s so easy. I’d totally ace that. 1) things that rhyme with “corn starch” 2) the rutles 3) edible bugs 4) a resounding “yes” 5) the capital of California 6) geometry.