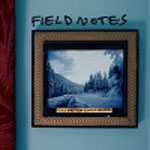 Maybe I've been a little more moody as of late. Just look back through some of my last few reviews and you'll find me complaining that there are far too many mopey male singer-songwriters in this indie world. Yet, somehow, I keep on listening to them like its going out of style. What can I say? I'm a junkie. A sad, indie junkie who likes to listen to sad, indie singers sing sad, indie songs. Field Notes fit that profile nicely. The solo project of Chad Hanson (Mines, The Dutch Flat) follows the tradition of Elliott Smith or John Wesley Harding, bringing together simple arrangements with exposed, emotional lyrics. Nothing like that combo to put the sugar in your coffee.

Field Notes' Color of Sunshine is not what you want listen to after a breakup. Hmmm. Actually, on second thought, it's the sort of disc that you know you shouldn't listen to, but it is very likely what you will find yourself listening to anyway. Not that the songs are Jeff Buckley style "abandon hope all ye enter here" melancholy, but a catchier Elvis Costello "Oh no, not again" style sadness.

"Who's Feeling Who" is perfect bitter-but-oddly-cheery song that captures the tormented lover frame of mind, with gently strummed guitars and hushed vocals with a Jonathan Richman charm. "Racing the Lanes" is a more lively number that is reminiscent of a hybrid of Elliott Smith and Tom Petty (if that's possible to imagine). It's not entirely somber enough for the Smith oeuvre, but its also too moody to fit into any Heartbreakers playlist. This is starkly contrasted by the Interpol-like immediacy of "Sister Says," by far the most aggressive song on Color the Sunshine, with a staccato beat and guitars strings that are hit more than plucked (and it name drops the Strait of Juan de Fuca, not bad from a Brooklyn native).

One of the strengths of Field Notes is the ability to create a hook. A prime example is "Strangest Things," a song that gets into your head after the first listen. Heck, it was in my head before it finished, with Chad singing "and the clouds breeze by in the strangest shapes/and you keep asking why nothing makes no sense" over rattling guitars that echo like an old Galaxie 500 track. "The Days" has more of an ballad sound like you might hear over a spurned lover's walk in a romance, with drums leaving the walker on surrounded by the swirling vocals.

Field Notes have mastered the ability to make something new seem very familiar. There is nothing on Color of Sunshine that is shocking or ground-breaking or mind-melting. However, that's not a bad thing. Instead, you can feel instantly comfortable in the Field Notes world like you've returned to your hometown after a few years away. Everything seems recognizable, but there's just enough newness that you're not uninterested. Sometimes that's all you really need from an album.