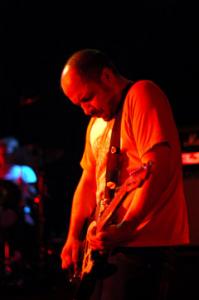 I'm sure you've heard that Seattle is the Coffee Capitol of the known universe, so I have to ask: Do you drink coffee? And if so, what is your favorite coffee drink?
Oh, probably a mocha. People in Scotland aren't that precious about their coffee. Most people just drink instant coffee.

Right down to business. Are you upset with America right now?
Oh, I don't know. I don't think it's reasonable to criticize a whole country.

Why not? We do it all the time.
Yeah, it's not really America's fault there are one or two problems with their foreign policy.

I notice that in every interview, something comes up about your adverse relationship with Blur. Really, all I want to know is how you feel about having something in common with Oasis.
Good. I like Oasis. They're decent fellas. They can really put 'em back, too.

Are you going to sing tonight?
No, I don't really do that any more.

So you're finished singing forever?
Pretty much. It's not really in our nature to step up to the mic.

You have a solid reputation as the loudest band in the world. How long do you think you'll be able to continue that?
I don't think we've been as loud recently as we have been in the past, to be honest about it. We're not really concentrating as much on the volume anymore.

How long before you take the Eric Clapton route and rewrite your songs for the acoustic set?
I don't think we'll ever do that. Although we used to do it when we first started. We only had five or six songs, so we used to play them twice – play them quiet and then play them loud. After awhile I think we finally realized how atrocious that was. There was one song that was quiet and loud, so we played it once slow and once fast.

So what's the set like now? Do you just play the songs straight up or are there a lot of changes?
We expand things quite a bit. There are a couple of songs on the new album that are pretty computerized, so we have to change them quite a bit. Everything changes a bit when you play it live. I don't really trust bands that can completely reproduce a record – I think that's a bit creepy.

A lot?
Not really. Not as much as you'd think.

So what are your guidelines for letting people use your music?
We usually just let them. We actually said no to somebody today; I think that's the first time we've ever done that. It was someone making a film, but it wasn't a very good film. But we usually just say yes.

We're not precious about it. And I certainly don't think there's anything wrong with putting your music in an advert. I've got friends in more commercial bands that are a bit extreme about it, but I just think it's a good way to expose people to your music. Not everyone hangs about indie record shops and buys fanzines.