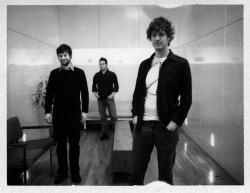 I'm here to dispel the Lights myth — that is, ironically, the Lights are not light. The Lights are dark and discordant, indifferently incongruous; their first full-length CD Beautiful Bird  (Bop Tart Records) rocks, but didn't prepare me for the live Lights, where their raw jangly antagostism broiled my ears, provoked my imagination, and moved my writing pen to metaphor.

The Lights were perfectly abrupt and awkward, without pretension. Halfway through the set, my imaginary boy friend leaned over and shouted, "You know, the Cure were once a three-piece playing in a club." The Lights featured a hollowed guitar making hallowed sounds, grand gestures with every simple chord stroke of minimalism. Frontman Craig Chambers served as the consummate yet unwitting star lead vocalist {and guitarist}, nearly begrudgingly blurting out these perfectly just-off vocals (from his just must-ed mouth). With bandmates PJ Rogalski {drums} and Jeff Albertson {bass, vocals} they formed an incredible symbiosis of sound influences difficult to adequately modify. But I'll try for comparison…

Imagine if Mick Jagger had been a Capricorn instead of a Leo, if Robert Smith never found hair product, and if Stephin Merritt/Ian Curtis/Nick Valensi all chimed in for good measure. The result: the Lights sounded New York punk raw but without imitation or derivation, like it actually was 1979 at CBGBs and this was the fresh, raw, glowing, dark (not light) punk.

Word had it around the Rebar that this wasn't even one of their better live shows.

I love this band. See them now in a dark smoky bar while you still can.