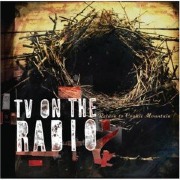 In the never-ending battle between major and indie labels, much territory is lost and won over the course of a few years. Heck, after the reorganization of the big guns in the early 00's, it was supposed to be a golden era for the indie labels as the majors shed those bands that just never seem to live up to the jump from the little pond to the big ocean. However, somewhere along the way, the majors seem to have decided that, "Hey, maybe we want some career bands instead of another 1,000 Avril Lavigne and Simple Plan clones." So, as quick as you can say "…And You Will Know Us By the Trail of Dead" (OK, maybe that's not too quick), the majors have scooped up a pile of bands that made their name on stalwart indie labels like Touch & Go, DFA, and Mo!Wax, among others.

So, here we are. In case you missed it, September saw the release of three albums that were much-anticipated major label albums from some indie champions. However, considering the major labels care about the indie press as much as they might care about, well, the welfare of small green plants in Uganda, we tend not to get a lot of these types of releases… but it doesn't feel right to just, well, ignore them. So, I will sum up these three albums in one paragraph each, just to keep us all in the loop.

Sometimes you can tell from the first 30 seconds of an album that it's going to be great. That's entirely the case for TV on the Radio's Return to Cookie Mountain, where the deep beats, twisted horns, and falsetto harmonies of "I Was A Lover" open up into a fuzzed out utopia of sonic experimentation. TVOTR join Modest Mouse and Built to Spill as some of the few truly independent bands on a major label, not giving up an inch in their new home, as they continue to build songs out of the richly complex melodies and harmonies that have TVOTR the favorites of all the cool kids. Songs like "Playhouses," "Wolf Like Me," and "Wash the Day" exhibit the bands wall-of-sound, while quieter gems like "A Method" are rich with a musicality that could, in other people's hands, just sound like, well, bad college acapella. If there's anything that can truly be classified as indie "prog rock," TV on the Radio is the bellwether, taking a synthesize of electronic, rock, and anything they can get their hands on into a collage of remarkably depth and texture.

Okay, I have to admit it. DJ Shadow has jumped the shark. After nearly perfect pedigree with possibly the best album in the 1990's (Endtrouducing), you could almost feel that Shadow was due for a mistake, but The Outsider is beyond my wildest nightmares. Not that it's a bad album as such, but for a guy like DJ Shadow, it can, at times, seem appalling the same way something like Moby's Home album was completely inexcusable. It seems like DJ Shadow has fallen in love with krunk and he's not ashamed to show it, but its his attempts at straight rock like "Artifact" that stand out as wholly unpleasant. There are, actually, a few gems hidden in the noise, such as the hyphy barnburner "3 Freaks" with Keak da Sneak, the downright sinister "Seein Thangs" with a surprisingly menacing David Banner and the electro-krunk on "Turf Dancing" (maybe it's the Davis namedrop in it that made me notice it). What happened to DJ Shadow, that's my question? Is he really just a composite now like some people think of Shakespeare? The Outsider lacks the grander scope that DJ Shadow album are usually rich in, but maybe he just can't concentrate anymore. Whatever it is, I hope this is just a detour.

The Rapture: Pieces of the People We Love

We all like to dance. All right, maybe not all of us, but the Rapture sure do — even more now, even out of their safehaven at DFA Records. There seems to be a little more Talking Heads in the Rapture stew, along with a few songs produced by Danger Mouse (then again, what hasn't he produced this year and he even got away with sneaking some Cee-Lo into the title track). Luke Jenner sounds a less like Robert Smith on Pieces…, restraining his voice from the manic ups-and-downs that careened through Echoes, and it works quite well. Instead, we get a more focused Rapture that puts together an album that's is much more even than its predecessor. Songs like "Getting Myself Into It" are the most like the synth-pop that marked Echoes, but its on tracks like "Whoo! Alright – Yeah … Uh Huh" that the band hits their stride, making a nearly perfect dance song, right down to the title. Jenner seems to be channeling a soul diva when he sings people don't dance no more/they just stand ‘round like this/they cross their arms and stare you down/and drink and moan and piss and you know that the Rapture, if given the opportunity, would kick all those hipsters arses that just feel too cool to dance the night away.