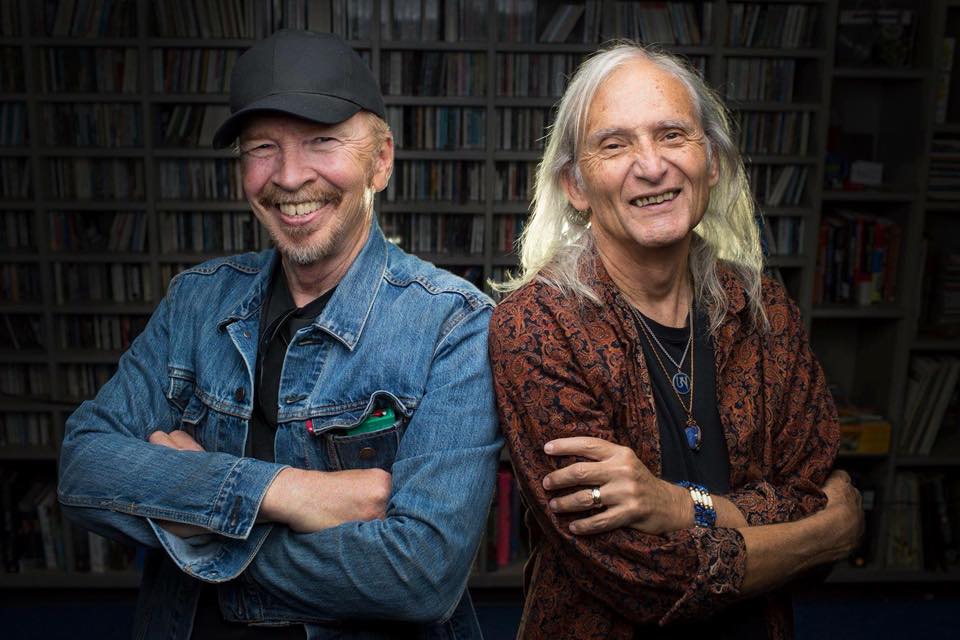 The second of a two night, two venue stand in Seattle brought Dave Alvin and Jimmie Dale Gilmore and their roots revue to the Triple Door on Saturday night.

Opener was the ever-amiable Jon Langford, invited, so he told the standing-room-only crowd, as compensation for providing the artwork on the sleeve of the headliners’ latest album. A multi-dimensional entertainer, he kept everyone happy with reminiscences of his punk days, tales of Johnny Cash and his odd mid-Atlantic version of three-chord Americana.

The setup was simple: two giants of the genre paying tribute to the roots of their roots music, trading stories and cracking each other up. Dave Alvin’s blueswailin’ chops and Jimmie Dale Gilmore’s high and lonesome tenor fronting a tight, well-seasoned combo, The Guilty Ones.

The old friends pedigrees were never in doubt, treading the boards for between forty and fifty years apiece – Jimmie is ten years the senior of Dave – with some of the most legendary of American bands. Although their paths crossed in venues small and large all over the country, this collaboration is their first. Curating a setlist drawn from their California and Texas bloodlines, it is crowd-pleasing without pandering, contemporary-sounding but true to its origins.

But tonight the stories were rambling and the guitar sparring slightly out of place in a supper club environment. Jimmie Dale Gilmore’s voice is a thing of beauty, a warm, tremulous instrument perhaps better suited to a room in the Benaroya across the way.

Chris Miller is a master of the Telecaster and his solos were neat and economical, but cranked way past eleven. This project was born in a duo setting and perhaps would have been better served that way to let the songs breathe and mine the experiences of these old road warriors for a mostly seated, rapt audience.

Half the set was taken from the Downey To Lubbock album released earlier this year, mainly covers spanning Woody Guthrie’s dustbowl balladry by way of the The Memphis Jug Band to the sunny Californian pop of The Youngbloods’ Get Together. There were a couple of reminders of Alvin’s deep catalog of gritty narratives and Gilmore went back to his Flatlanders years for Dallas and the timeless Tonight I Think I’m Gonna Go Downtown.

The show closed with a barnstorming version of John Stewart’s July, You’re A Woman and the duo returned for a rousing multi-song encore guaranteeing the well-fed audience a warm and fuzzy send off.