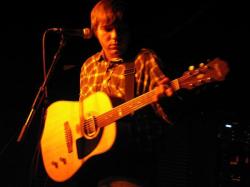 Holiday parties, end of the year work deadlines, last minute holiday card writing, and gift procuring madness couldn't keep me away from a Visqueen show… especially one with David Dondero opening up… although those distressing things could make me late to the show. An unfortunate occurrence resulted in my missing the first few songs of David Dondero's set. Yet even with this reduced David-time, I was still able to be crushed by his pure unadulterated honesty, conviction and poignancy by the time he exited stage right.

Because his latest release Shooting At The Sun With A Water Gun (appropriately on Future Farmer Records) had been in high rotation in my home earlier this year, I'd had a bit of warning that this wasn't the most emotionally consistent bill. Where I'll later be discussing the glorious rock 'n roll-fun-Visqueen-time, their opener Mr. Dondero was serious, solemn, and slightly jittery. If looking for similarities, the most obvious comparison is to Bright Eyes', Conor Oberst. His shakey, heart-on-the-sleeve poetic take on the everyday human inhumanities not only tears you up but also empowers you with his lyrical condolences.

This evening, he seemed eerily alone on the stage. It was just him armed only with his beat-up acoustic guitar (complete with a gaping war-scar hole in the body) with two bright stage lights beating upon him. The sparse Graceland audience was muted by his intensity… except for one lone jackass. The guy in the back who, either because of pure stupidity or too much Brass Monkey, had the nerve to heckle David near the end of the set.

The exchange between singer and jackass began with a shout from the jackass calling for the singer to wrap it up. David, obviously not one who lets jackasses get away with being jackasses, confronted him from the stage. In an effort to see the jackass, he squinted his eyes and cupped his left hand over the top of his brow. He retorted, "You think it is so easy… come on up here. C'mon. You think you can do better… c'mon up!" Minutes that felt like hours passed as uncomfortable silence fell over the room while the jackass mumbled and David stood there. The six or so of us in the audience who couldn't bear the thought of him ending the set like this, encouragingly tried postive reinforcement tactics like yelling out songs of his that we still wanted to hear and throwing piercing looks to the jackass in the back booth.

Thank goodness the situation died down just enough for David to start one of the audience requests. Within minutes, we were back on track. Whew. He played the most crowd-pleasing of songs from his recent album, The Real Tina Turner before exiting the stage.