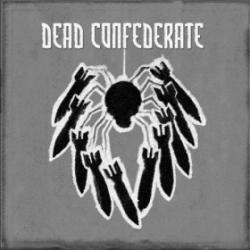 As Dead Confederate's self-titled EP begins with the tearful, reverberant ballad, "Memorial Day Night," fear sets in: Does the world need another My Morning Jacket? The intensity reaches a hilly climax and the song tapers off to a gentle dénouement of whispered guitar, guaranteeing the band a slot on the presently hip, sounds-like-Wilco-and-Neil-Young shelf. But, before you can say Yankee Hotel Foxtrot, the fellows from Athens spill out a wash of harsh tremolo-caked distortion to open "The Rat." The song calms down a little, but we now know that we are not dealing with the school of Jim James song presentation.

We've only got three songs left, but it's just enough time for Dead Confederate to let us know that they are an honest-to-goodness hulking, lumbering giant. The experience of listening to the 25-minute EP is as emotionally draining as running through a minefield to escape a lion, and equally explosive.

There's a little bit of Pink Floyd in "Tortured Artist Saint," a little bit of Dinosaur Jr. in "Get Out," and a few pinches each of The Pixies, Nirvana, and Superchunk in "Shadow the Walls." Even with these nods, it's difficult to pin down the source of Dead Confederate's gritty rock, and the songs feel fresh and important.

There are a lot of bands doing heavier, down-tempo music right now and, if this small body of work portends future output, it's really exciting to have stumbled upon the one band that is going to stand out and define the genre. This EP leaves us desperately wanting a lot more, and a full-length follow-up is due in the spring to fulfill that need.

I would be willing to wager that you'll be seeing this forthcoming work on a lot of Best of 2008 lists. Even if I am wrong, these five songs alone prove that Dead Confederate is a band to contend with.