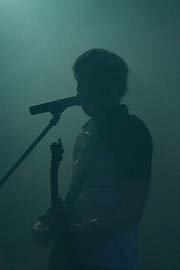 Last Saturday's {September 17, 2005} stellastarr* show was a packed one at the ole Chop Suey. This is a good sign for our band from NYC, especially considering it was the same night as the KEXP "John in the Morning" showcase as well as the NME acclaimed Antony & the Johnsons; the stellastarr* show was packed with folks.

I am not sure who my fellow showgoers were, but the place was full with what felt like Bellevue-types in tight-black-shirted mall attire and Hot Topic Goths. I must admit that it makes me proud that their appeal has grown past the inner-circle hipsters that use the lines from "My Coco" as punchlines with their significant others. stellastarr* know how to write stylish and catchy songs, and it's nice to see that the masses are starting to take notice.

Sure the performance was tight, the fashions were tight and the rockstar banter was charming and, well, tight… but the most memorable piece of the evening was the out of control smoke machine. As you can see by the photos taken by our lovely imaginary boy photographer Brian, most could only see silhouettes of the band. Rumor has it that the men's room, which is about ten feet from the stage, fell victim to the machine as well and was filled with the dense fog by the set's halfway point.

Even though I'm not a fan of encores, I was happy to hear {since seeing through the fog was difficult at times} stellastarr* come back on stage and play my two favorite songs, "My Coco" and "Somewhere Across Forever". I'm pretty sure I wasn't alone {although I could have been — again with the fog}. The crowd went crazy as soon as they heard those first familiar, catchy riffs.

It is always ambitious for a band to tour in support of an album that is just a couple days old {Harmonies for the Haunted was released three days before this show}. Who knows, maybe next time they come to town, folks will be bursting at the seams for a piece of the HftH action.

Now, looking ahead, hold on to your bonnets, because on Friday {September 23, 2005} the Two Gallants are back in town. They are part of the spectacular Portastatic / The Rosebuds / Holy Ghost Revival show at the Crocodile. The Two Gallants exude cool in each of their heartbroken bluesy folk lullabies. They have the souls of seniors and the stamina of freshmen. Their recent signing to Saddle Creek Records came as no surprise since their part Bright Eyes, part White Stripes sound has been known to incapacitate mortals.

Then, you may not know this, but I am a picky film buff… which means that when I find a film that makes me want to learn quotes from it, it is something spectacular. Next Monday, September 26th {at 9:15p} the Northwest Film Forum is showing one of my favorite films of all time as part of their 10th Anniversary celebration. Ladies and Gentlemen the Fabulous Stains is a brilliant film and a "rarely seen music industry satire following angst-ridden Corinne 'Third Degree' Burns (a 15-year-old Diane Lane) and her riot girl band's rise to fame." It is a cult classic that also stars Fee Waybill {The Tubes}, Steve Jones and Paul Cook {Sex Pistols}, and Paul Simonon {The Clash}.

This Tuesday, September 27th, local singer-songwriter Sameer Shukla will be having his CD release show There's Only One Side Tonight at the Crocodile with Chris Staples and Matthew Shaw. The album was produced by Shane Tutmarc of Dolour and clearly was influenced by Shane's Pet Sounds influenced pop, but Sameer is a talented song-writer in his own right. Sameer's breezy pop stylings are spot on, his voice is clear and earnest yet has just enough of an edge to hold your interest, and he combines wise lyrics with hooks galore.

I have picked other two favorite shows for the week, and of course they fall on the same day: September 28. So I can tell you about both shows, but you will likely have to select one {like an indie-rock Sophie's Choice}.

First off, I'm sure you've all h eard about ::W:I:R:E:: by now, a Wednesday night extravaganza at the Baltic Room that features great DJ and dancing, paired with one up-and-coming (and generally Brit-pop flavoured) band of the moment.

This Wednesday you can catch The Pharmacy, brazen pop-infused punk with just enough attitude to keep the hipsters happy. They pretty much blew our stripey knee socks right off. And check it out — their CD will be released on my new favorite local record label {um, based on name alone at this point}: Don't Stop Believin' Records.

Damnit, I wish I had thought of that name myself…

That Pharmacy album, B.F.F., has been in high rotation in my cd player for weeks. Their songs are full of energy with A.D.D. punk sensibilities fueled by Kane Hodder adrenalin. I doubt they'll be contained by the wee Baltic Room stage.

And then, for those of you up for an ambitious night on the town, you might want to scoot down Pine and down 2nd (oh wait, you can't go down 2nd… go down 3rd, swing around Crack Park looking for parking, and then go…) to the Crocodile for a sweet ass local lineup featuring The Joggers, The Planet The, and The Preons.

If you are looking for a way to help a fellow Seattle music fanatic, on Thursday, September 29th, travel a couple minutes south to Jules Maes Saloon in Georgetown for a benefit to help John Nelson with his medical bills. John is a radio DJ at KMTT (The Mountain), Metro Traffic Reporter, all around local music lover and has been in the hospital since late July. Your $15 suggested donation gets you a front row seat to an auction, free food and performances by The Dusty 45s, M-Set, Two Buck Chuck, The Waterbabies, Jerry & The Phillbillys, Twink the Wonder Kid, and Shane Cobane as Elvis.

I won't forget you, Coco.