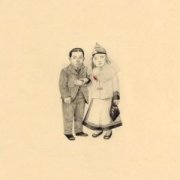 I have just had a good time listening to the major label debut of The Decemberists over and over, squeezing out sparks of joy and amusement at its invention and restrained ambition over the past few weeks. And cringing as I was reading logocentric critics blathering on about its supposed "literariness" and struggling with revulsion over its supposed "embrace of progressive rock."

Both of thjese comments are just angles hacks take to avoid spending more time with the music, absorbing the admittedly convoluted but compelling storytelling of bandleader Colin Meloy, in language not all that much more "literary" than anything on a Bob Dylan or an Elvis Costello album. Okay, so the combination of more obscure words and faintly archaic musical forms may suggest some sort of complicated nostalgic aesthetic on the band's part, but to me it's no less organic than the Pogues. There's just a little less male prostitution and getting kicked in the nards by the cops.

But before getting my own ass beat down by a score of Celtic crusty punks, just think about it — Shane McGowan reads plenty of books too and warbles yarns as well and never himself fought on the seas. And his voice has the same hypnotic persistence that creates a consistent style to deliver the songwriting. The characters in Decemberists' songs don't betray the strange back-story of the album's concept, some sort of Japanese fairy tale about husbands and cloth and I don't really remember much else.

The real story here is the quietly lush and modestly robust production of this smooth song cycle by the irresistible Tucker Martine and Chris Walla (the Nick Lowe of the new millenium), both of whom crisply capture the band's noir-funkiness in "The Perfect Crime #2" as well as the stark horror of the "Shankill Butchers." These guys capture the Meloy's deft ability to sing about anything, including murderous Protestant predators and political assassins, and the band's rootsy groove wherever required. Meloy is as empathetic as a narrator, as his troupe is sensitive to the meanings of the songs themselves. My only criticism is that sometimes I wonder if we admire The Decemberists more than we love them. But the fact that a major label has allowed them to remain respectable is an announcement in itself.

Back to the backlash: It could be, for as word-obsessed as reviewers are, they're not particularly intellectual themselves. There have been a few decades of fractured minimalism in pop song lyric writing we've all grown up on, and a certain sniping Dean of Rock Critics was never known for particularly appreciating true rock idiosyncrasy in the first place. As for progressive rock, yeah, one song is really freaking long, but that's about as "progressive rock" as things get.

The Crane Wife could use more levity, more varied vocals, more direct expression, to put it into an area like truly affecting Pogues territory. (The new Shins album is a great example of how to maintain one's style yet put some powder on its nose and spring in its step, too.) But the convincing emotionalism of the first (sort of title) track, the great vocal interplay between Meloy and Jenny Conlee on "Yankee Bayonet," and the empathetic narration of "Shankill Butchers" make this a strong record in spite of the daunting heft of its press kit and those to come.