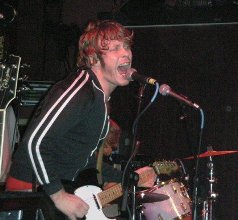 Many bands prefer to run through their songs without much thought. But, there are some who dare to defy the norm, creating an entertaining spectacle of themselves and their environment. On Sunday, November 5 at Neumo's, OK Go and Quit Your Dayjob gave a prime example of how to stuff enough fluff into a performance to keep things noteworthy from start to finish. Surf rock, new wave, and electro punk walk into a Swedish bar, get wasted, and start a band called Quit Your Dayjob. This isn't the lead-in to a bad joke — or at least I don't think it is. After seeing Quit Your Dayjob play live, I'm not sure what to think anymore.

These guys are so far from convention, it's nearly impossible to describe them in conventional terms. Their songs are short and sporadic, and generally consist of earsplitting synth and punk-infused surf guitar over breakneck drumming. The titles of their songs range from random to just plain befuddling, from "Look! A Dollar" to "Pissing on a Panda," and these titles are usually repeated beyond redundancy throughout their respective songs, constituting the bulk of the lyrical content. In the course of their set, Jonass, the lead singer, often engulfed his microphone with his bellowing mouth, and at one point he turned and managed to catch in that very mouth a globule of spit sent from Marcass, the keyboardist. Marcass, not to be outdone, disrobed to all but his skivvies. Seemingly oblivious to all of this derangement was Drumass, who continued to pound his drums with all of the sweaty-hair-in-the-face intensity of Dave Grohl in his younger days.

Quit Your Dayjob is something. What exactly that something is I'm not entirely certain… but it's definitely something.

If you have ever used the words "treadmills," "dance," and "awesome" in the same sentence, then chances are you were talking about OK Go. They have become completely synonymous with their music videos, and though "awesome" is an appropriate adjective to describe those one-take wonders, they definitely give OK Go's audience an unusually high level of expectation. Any band cool enough to make such impressive music videos must be able to put on an impressive show, right?

Right, actually. Fortunately, these fellows definitely do know how to entertain a crowd. One of the greatly appealing factors of their performance was the grandeur of their settings. Two or three songs into the set, the screen behind the band was illuminated by a massive image of lead singer Damian Kulash's face, projected live from a camera attached to his microphone. As the show continued, it often shuffled between that image and the more song-specific ones (such as the artful designs for "Here it Goes Again," which featured a certain exercise machine), providing a backdrop that seemed larger in scale than one might expect from a modest local venue like Neumos.

More important than OK Go's surroundings was the skillful interaction they had with the audience — namely from Damian Kulash. Kulash is a quintessentially charismatic lead singer. He is a great conversationalist when it comes to filling those awkward gaps between songs, and he has a knack for making one-way discussions with even the stalest of crowds seem mutual and captivating. Even after Tim Nordwind's bass dropped mysteriously into silence in the middle of "Here it Goes Again," Kulash didn't ignore it or apologize for the technical difficulties as many frontmen might have done. Instead, he casually pointed out the obvious fact that their hit single was lacking a rather important instrument, and proceeded to keep the crowd busy until everything was apparently in order. When the bass dropped out again early in the following song, he even went so far as to stop the show, while retaining enough wit and spirit to nearly convince me that the whole fiasco was as well-rehearsed and staged as one of their videos.

At the tail end of the show, OK Go did the expected: they reenacted their "A Million Ways" dance, complete with a giant image of their original backyard background backing them. I don't know what was more impressive — the choreography itself, or the fact that the band was able to pull it off as if they hadn't already danced to "A Million Ways" a million times before. It might have been too much of an obligatory routine to give their performance the climactic encore it deserved, but the crowd seemed pleased nonetheless, and crowd pleasing is what OK Go does best.