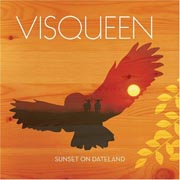 I saw Visqueen for the first time during the Sasquatch! festival last May at the Gorge. They were sharing the mainstage with all those other favorites that made it impossible to stray to the sidestage. Yeah, I wanted to see the Long Winters, but moving me from my prime standing spot for Built to Spill, Sleater-Kinney, Aveo, the Shins, the Postal Service, the New Pornographers and Harvey Danger was going to be about as hard as moving one of the glaciers on Rainier.

My younger sister was there beside me, a little perturbed that she was going to have to see about half a dozen other bands she had never heard before until her beloved Postal Service took the stage. She had, in fact, wondered aloud rather repeatedly on the drive across. By the time we got to Vantage, I had had almost enough of the, "Why do we have to get there so early? I thought you said Postal Service was one of the last bands."

"Because we have to be there by noon to see Aveo," I explained.

"But haven't you seen them like a million times?"

"No, only about five or six. And they're amazing."

But once Visqueen finished their half-hour set, she turned to me and said, "I need to buy their album."

This was a relief to me. My sister is not one to search through the masses of records for a cleverly brilliant pop album like Visqueen's 2003 debut, King Me. But here she was, as excited about the band that just played as she had ever been on a Christmas morning. But if there was any band there that day I knew my sister would get into, it was Visqueen.

Why? Because they just flat out rock. And Rachel somehow gets away with being a sweet girl, while managing to be a badass at the same time.

Visqueen is Rachel Flotard (guitar, lead vox), Kim Warnick (bass, vox) and Ben Hooker (drums). You can hear the snotty drizzle of a Tuesday morning in Seattle's November in the guitar distortion. There echoes winter clouds in heavy-metal air-guitar inspiring pop songs. Yet somehow they demand to be played in the summer. Their debut album, King Me, was one of the easiest albums to love in 2003, and this fall they've come back with their Phil Ek-produced sophomore set, "Sunset on Dateland."

Just like their debut, the album is power-packed with Flotard's sweet yet sincere, metal yet pop, loveable yet frightening lyrics and voice. She's a little like Jenny Lewis of Rilo Kiley and the Postal Service. But if you screwed over Jenny in a relationship, the worst she might do is call you an "asshole." Flotard might call you an "asshole," but she'd actually kick your ass first. She's what Avril Lavigne pretends to be.

Sample lyrics from "Dateland": "Suuuuuiiiiiciiiiiiiidddallllllll/ You're feeling suuuicidaaaal/ You tried a hundred dresses on/ But you're not feeling all that bridal." Imagine a choir girl with torn Levis and a beat up Gibson screaming sweetly and spitting into the front row.

In short, Visqueen rocks out to the kind of stuff you hear in your head whenever you play air guitar. The guitar is distorted in Spinal Tap fashion, the bass is right up front in the mix, so much so that you can feel the notes in your torso as at a live show. And Ben Hooker's drums are seasoned craziness. And you can tell they love what they do — something that sometimes gets hidden beneath lush production. But Ek knows what he's doing; he's proved it with Aveo, Pretty Girls Make Graves, the Shins, and Modest Mouse, and now again with Visqueen.

I was driving into D.C. when I first heard the new record. After checking my mailbox for the past week like I was waiting for a pregnancy test to come back, I saved the virginal listening until I had an hour left of my drive.

The best way to describe that hour is probably to say Visqueen's Sunset on Dateland was the best music for the end of a long drive. Excited at finally getting there, bobbing my head up and down and up again, singing along when the choruses came along for the second time, etc. As I got to my friend's apartment in Arlington there was an immediate, "Dude, you gotta hear this." He replied, "Fine, we can listen to it on the way to the bar." After listening to opener, "Look Alive," my friend turned to me and asked, "Is it supposed to be angry or happy?" I said I wasn't sure, but that was what I loved about it. "Dateland" is an album to listen to when you're frustrated with your life. But it's for that frustration that comes without any sort of particular reason. Of the nine tracks on "Dateland," "Friends in Love," and the closer, "Houston," terrify and terrorize that frustration.

Let's say you like your job, you like your friends, you like your boyfriend or girlfriend, you're pretty much content with everything — yet you can still feel a tiny itch of depression in the middle of your back where you can't seem to reach. The conflicting emotions between Flotard's lyrics and the raucous joy of the music itself turns depression's itch to a tickle.

"Dateland" is the record for punching your pillow while you pretend it's your ex. It's the record your little sister loves because Flotard is sweet and hardcore at the same time. It's a record without complexity, like an easy homework assignment you know you're going to get an A on. It's nitty-gritty, witty-pretty, muddy sun dresses in summer and pouring lemonade on your best-friend's older brother. It's just damned awesome. And if you want more of Flotard's wit, then just read her Imaginary Column, Love is Hard.