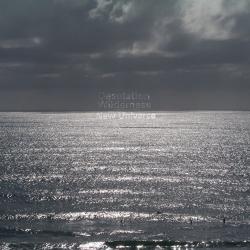 If the title of Desolation Wilderness’ second full-length is taken as ironic, it would be giving them credit for a sense of humor that the album does not convey. What New Universe does give the listener is the feeling of a lonely and meaningful nap in a hammock on a generic beach with waves crashing and sun setting. This universe is not new, however. This universe is much the same as the one that Desolation Wilderness let us get lost in on their last album, White Light Strobing.

Herein lies their charm. They have found something that works for them, something you wouldn’t necessarily expect to come from K records, but here they are offering up layers of synthesizers and dreamy vocals that come from far away to remind you of haunting moments of glorious solitude on songs like “San Francisco 2AM” or “Slow Fade.”

Their expanded lineup includes the female vocal harmonies of Washington based, saccharinely sweet, solo artist Ashley Eriksson on the glockenspiel sprinkled “No Tomorrow.” Additions such as this add new dimensions to Desolation Wilderness’ hazy, shoe-gazey daydream, new dimension that invite you into their folds and lull you to sleep with all things soft and subdued. Everything about this album is subtle, especially the ways in which the band has grown in their sound, Adding new members and instruments does not effect a change in the identity of Nicolaas Zwart’s brain child.

Consistency is what New Universe most readily brings to this Olympia based band’s collection of music. The consistently soft roar of effect pedals and three different synthesizers used between “Boardwalk Theme,” “Moon Dreams,” and “Strange Cool Girl.” The pulse behind their swooning drone beats on as “Satelitte Song” mirrors “Come Over in Your Silver Car” off White Light Strobing.

The distorted waves of sound and piqued guitar notes play through a wind tunnel, whisking away the beginnings and endings of Zwart and Andrew Dorsett’s singing, leaving behind extended vowels and the moans of consonants on White Light Strobing are maintained and, ever so slightly, expanded on New Universe. This album shows how a band doesn’t have to reinvent their sound to be effective, but should perhaps rethink their album name.