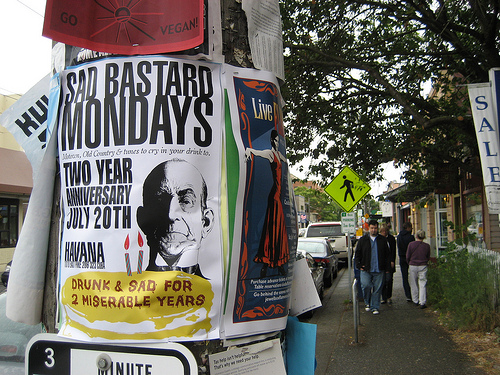 As stated last week, purchasing a plane ticket to spend two nights with the Wrens at Schubas may very well have been the best decision I’ve made in the last several years. However, changing my return flight last-minute so I could catch Glen Hansard and Sam Beam play a benefit show in Austin kicked that good decision’s ass, right out of the park. All the way down to Texas, in fact.

Playing a benefit for the Midwive’s Alliance of North America on an unsuspecting Monday night, Glen Hansard (Frames, the Swell Season) and Sam Beam (Iron and Wine) blew the roof off of the sold-out Paramount Theater with a few hours of literal perfection. Opening up the night on more of a split bill than a warm-up, Glen took us on an hour-long trip through his diverse catalog: some choice Frames tunes (like “What Happens When the Heart Just Stops” and “Lay Me Down”), new-fan favorites from the Once soundtrack (opening the set with “When Your Mind’s Made Up” and the jaw-dropping, haunted, screaming perfection of “Leave”), and a handful of new selections for a taste of the upcoming Swell Season album (most notably a lovely track called “Paper Cup”). Spending the bulk of the set wedged behind the speaker stacks stage left, I had a birds-eye view for everything Glen let loose — from sheer blissed-out joy to the anguished cries at the ends of particularly staggering verses, and circling back again.

Having been a dedicated Frames fan for years now, Glen Hansard’s set was definitely the driving focus of my trip. But I quickly found out that Sam Beam was a force to be reckoned with — as I settled into my seat, hearing the familiar strains of “Such Great Heights” and tracks off of The Creek Drank The Cradle, it became abundantly clear that Sam was no ordinary sad bastard. Gorgeous, verbose stories told through seamless lyrics, all layered together with a perfect vocal pitch and unexpected chord/key changes — in short, the man came pretty close to knocking my socks off. Without exaggeration, and to the point where one lovely, haunted track had everyone in the surrounding rows (me included) fighting off tears; all set to the delivery of a loose, warm, friendly, thanks-for-coming-on-my-trip kind of vibe.

By the end of the night, every three-figure degree of heat was nothing more than an afterthought — and if you’ve been to Texas at the end of July, you know that’s saying a lot.

{A little imaginary bird told me that we might be privy to a Swell Season album preview, and some possible US tour dates in rOctober! Stay tuned for details, and be sure to stop by the flickr pool for more shots from Austin.}