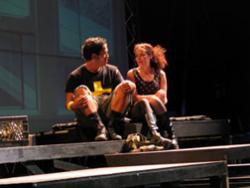 Three metal-lined screens surround an otherwise minimal stage, with slick enviro-projections providing varying backdrops for the settings and narrative of Diana Moves, a well-meaning but wildly uneven new rock musical now playing at ConWorks. Those beautiful projections (alternating between still photography, video collages, and colorful digi-mation) are truly awesome, and almost reason enough to schlep out to the enormous (but not air-conditioned… hello heatstroke) lower Boren space that we all know and love. L.B. Morse (projections and scenic design); Eric Davis, Dina Maugeri, Michael Lindgren (video); and Jordan Christiansen (animation) are to be commended for providing the best thing about this production.

The other best thing is live band The Quick, headed by Rob Knop, who also wrote the rockin' uplifting score. The five-member on-stage band seems effortlessly great, but the libretto (by Knop and playwright Sheila Callaghan) mostly falls flat. The most magic moments occur when the instrumentals and projected animation happen alone together; I wish the play featured more of those.

Ambitious and adventurous as it is, the story itself — about an angsty pregnant physically-challenged teenager named Leslie (commendable Meg McLynn, whose soulful singing voice occasionally made me quiver), told in flashbacks during a road trip from L.A. to a rawk show in Portland — really doesn't add up to much. For one thing, some character development would've been nice. Case in point: Leslie's druggie mom (fantastic Whitney James, who gives the best performance possible with what she has to work with) is the very reason that Leslie is differently-abled. And I'm not talking genetics here. A scene in which she actually pimps out her crippled daughter to a scummy dealer in return for a sweet hit of H (!) comes off absurdly unbelievable and totally (unintentionally) funny; I felt like I was watching early John Waters… and that certainly isn't the intended effect. (Even after all that, Leslie still continues to bum drug money for her messed-up momma. I mean, really.)

Another cast shout-out to Amanda Lee Williams as one of a posse of humorously rowdy punk-misfits who pop up time and again, and who are always a welcome sight. I'm dying to see a spinoff featuring Williams' ratty pom-pom-haired character in the starring role.

But back to the play at hand. Believe it or not, it's ultimately a love story, and it isn't until the happy ending that we get our first glimpse of the wee lass known as Diana (again, via the wonderful vid screens). She does indeed move, and so did my cynical heart. A little.