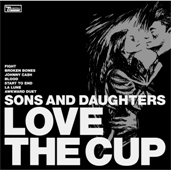 They have it. They have that coveted "it" which is so elusive and difficult to define. But I am a writer, so it's my job to try and put a few words to it.

Franz Ferdinand boldly proclaimed Sons And Daughters and as the best new band in the UK, and while that may seem a bit audacious given the scores of bands that the Common Wealth produces, he may not be far from the mark. You may recall S&D's Adele BethelDavid Gow from their former role with Arab Strap, whom they backed for a number of years. But far from the laid-back lounge music that underscored Aidan Moffat's intoxicated perversions, Adele and David have reached deep into the dark and cold ground for the fire that feeds this baby.

Like prophets in their own land, however, Sons & Daughters were not immediately received. Despite the glowing Ferdinand endorsement and the Moffat ties, it ended up being a relatively obscure indie label in New Jersey called Ba-Da-Bing that took the initial risk of signing this Glaswegian band. So, they took this break and blew the fucking doors off the barn at SXSW this year, earning them enough buzz to rear the beast's ugly head and get noticed by a larger indie label, a reputable booking agency, and the inevitable swarm of parasitical reviewers such as yours truly.

But enough history, what is it about the seven tracks on Love The Cup that is so captivating? Let's deconstruct the band. Consisting of four members, two lads and two lasses, and splitting the role of primary vocalist between Adele Bethel and Scott Paterson, they bring with them a simple setup of two guitars, keyboards, drums, bass and the occasional mandolin. Compelled by a forceful and unapologetic drum beat, matched with equally forceful and unapologetic Scottish-tinged vocals (alone Adele's and Scott's pub-style singing is nothing particularly special, but works in context), they have tapped into the same primal energy as The Flaming Lips, PJ Harvey, Sixteen Horsepower, or Black Eyed Snakes.

From what I discerned through the brogue, their lyrics are sinister, suggestive of Nick Cave's Murder Ballads. "You keep on holding back/thinking to yourself/your life is nothing/but the fear's making sense," sings Adelle in a melody reminiscent of Arab Strap, but with greater intensity, on "Lune." And, along with Nick Cave, they pass a hearty nod towards the father of Country-Noir, testified by their homage to the Man in Black titled, aptly enough, "Johnny Cash;" a naked and brutal hellfire assault which seemingly channels the devil himself.

But their real magick rests in a nearly alchemical manipulation of the effect that tension and release has on an audience, in creating anticipation, in knowing when to let go and when to restrain. Too long have we been conditioned to stand stoically along the side, analyzing the band as we would an art installation, not showing a hint of emotion let alone any actual enjoyment. With arms folded, we nod our heads, glancing to the left and right to check that we're not too out of sorts, comparing hair cuts, vintage cowboy shirts and shoe choices. Every once in awhile a band like Sons And Daughters comes along and taps into something raw, making us involuntarily shake. We get lost in the motion and begin to dance, forgetting for a moment about how silly we all must look.