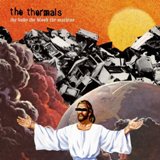 The Body, The Blood, The Machine

It has been about two months since I originally plunked the new Thermals album The Body, The Blood, The Machine into my CD player and took my first listen. That first reaction was, well, revulsion. Sudden, abject revulsion. However, as with most painful memories of life, a little perspective can help calm the nerves, settle the stomach, and return to sane, lucid thought. Do I, amateur music critic person, have the emotional and intellectual character to look back at my first take on the album and say, "Mr. Gonzalez, you are a fool! A foolish fool!" Well, maybe I can't make it that far, but needless to say after this whole set up, my impressions have changed of The Body, The Blood, The Machine.

My biggest initial criticism of The Body, The Blood, The Machine was the lack of that certain Thermals' spontaneity that has dominated their previous work. They have the knack for sounding like they recorded their entire album over a long weekend in someone's parents' basement. There was an undeniable appeal to that kind of rawness and D.I.Y. mentality. So, when suddenly presented with a well-produced, well-constructed concept album like The Body…, my initial reaction was like finding out that purple-haired punk rock girl from high school grew up to marry a investment banker and is now a housewife in Redmond. My view of right and wrong in the world was torn asunder, and I felt everything I might have known was wrong. Ok. Pause, Deep breath).

The fundamental aspect to dealing with a transformation like the one encountered on The Body… is whether the past form of an artist can be compared to an ever-evolving artistic message. Sometimes, this task is easy — it would be hard to argue that Moby's recent incarnation as a John Mayer wanna-be on Home is better than his postmodern Gospel of Play; however, this argument could also be applied to his attempt at hardcore, Animal Rights (an album that perhaps no one in the U.S. that actually liked it but me). Which album is better? It's solely dependent on your context and mind frame at the time.

I wanted more freewheeling Thermals, Thermals that were dangerously carefree. Now, suddenly I was presented with a version of the Thermals with a message and a produced sound that helps convey their message. The logical disconnect between expectations and actualization can be disastrous.

Why, then, am I attempting to have this discourse with myself on this particular album? The problem is that The Body, The Blood, The Machine is damn catchy and once you're able to come to terms with the evolution of the band, you can find that they're still in there, but with a maturity that can be confused for "selling out." As much as I didn't want to admit it, I was wandering around town humming "I Might Need to Kill You," I was listening to "Here's Your Future" on repeat on my iPod, I was appreciating the slower tempo of a song like "Test Pattern." All of this is not to say my original impression was wrong — it was just an impression, and as with anything, these things are mutable. The album still feels somewhat underdeveloped at points and I do miss the anarchistic tendencies of the Thermals, but much like Cursive's Happy Hollow, the Thermals are trying to extend themselves outside of their perceived niche.

The Thermals are growing up, and sometimes that's hard. Everyone likes the 22-year-old girl who parties, flirts with everyone, and seems like she doesn't have anything to weigh her down. However, if that 22-year-old is still that way at 29, it's not as cool anymore. Priorities change and sometimes you need a little more substance, a little more certainty. That's what these new Thermals are providing: a new musical certainty and confidence that removes them from a one-trick-pony status. The Body, The Blood, The Machine still seems like the cleaned-up version of Ally Sheedy, but there might be appeal to her (even though the high school punk in you still likes the the first one better). It just takes a while to get used to it.

So, when you read that first take on the album, keep in mind that most music critics are, well, fools.