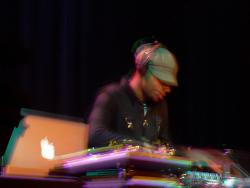 If Bruce Springsteen was right when he said that “Bob [Dylan] freed your mind the way that Elvis freed your body”, what do we do with the rare artists who free both?

I’m not saying they automatically deserve the same lionization that Elvis and Dylan (and Springsteen) have, all of whom have very secure legacies (and deservedly so). My only point is that more people should pay attention to Paul D. Miller, or DJ Spooky.

Miller is a thinker who DJs; a very big thinker. On Saturday night he came through Seattle for two separate events that are both important to grasping his genius. The first was a dinner through One Pot and that was followed by his DJ set at Nectar later that evening. The dinner was to discuss his latest book, Sound Unbound and the DJ set was to showcase his tribute to Stax Records, the legendary soul label that recently celebrated its fiftieth anniversary. I was fortunate enough to attend both.

The dinner took place in a gorgeous loft in Capitol Hill, two large banquet tables, lots of smart, interesting people milling around, eating delicious food and drinking wine. After everyone had eaten some delicious risotto, Miller gave a brief talk about how trends throughout the music industry and how software affects its creation and distribution. There were a couple of points that stood out to me, one of which was that Miller said jazz artists scorned hip hop when it was an emerging art form because of its reliance on sampling. He also offered his insights as a working artist who gets the use of the internet as a democratizing force and its difficulty in culling intellectual property laws.

Some of his material screams pretention, like a forthcoming film he’s working on after spending time in Antarctica to capture “the sound of ice”, but his musical project this evening was much more accessible. Titled “Video Soul”, Spooky’s DJ set at Nectar was played to a pretty large crowd at Nectar and had gotten a lot of people dancing; going on at 12:30 and continuing until at least 2:20 (when the wine and risotto were finally catching up to me). He had a monitor projecting video of legendary soul artists while he spun and mixed records. Nectar was largely full, although not crowded for the set. Still, even at 2:20, when I left (or was it 1:20 due to Daylight Savings Time?), the place was still about half full. It had the feel of a great party. Although it was the day after Halloween, many people were still dressed in costumes.

DJ Spooky made mixing and turntablism seem easy, going from one beat to another without missing a step (only around 2:15 did I notice one awkward transition) but for the most part it was pretty flawless. He often mixed a lot of soul performances with more contemporary hip hop beats. It worked very well for the evening, giving the crowd big, 4/4 beats to dance to while still hearing music from Aretha Franklin or James Brown or Gloria Jones’s original version of “Tainted Love”.

What I like about hip hop music is that it operates within its community first. I live in Rainier Valley (south Seattle, at least until the end of the month) and hear often hear Geologic of Blue Scholars or Sir Mix-a-lot rhyme about places I drive past every day. With DJ Spooky, his community is made up of ideas and thinkers. He often takes part in discussions with classical composers, writers, public intellectuals, etc… and writes eloquently on art’s intersection with our daily lives. Saturday night we thought about those ideas and danced to his beats. DJ Spooky, through two separate and unique events, showed his big ideas in both theory and practice.