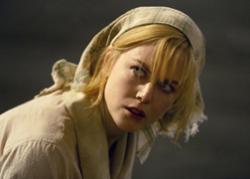 Nicole Kidman is on my nerves. She’s too into looking cute lately. Did you see her in Cold Mountain? Hello, it’s set in the Civil War and she’s perfectly coiffed in every scene, wearing DKNY-ish outfits and a magnificent black coat that never gets dusty. Whatever. Same in Dogville, where her character, a beautiful fugitive named Grace, is violated and abused in countless ways yet still manages to look fresh as a daisy throughout the film’s 177-minute (!) runtime.

Grace is on the run from some gangsters, you see, when she happens upon the isolated, seemingly idyllic 1930s Colorado town of Dogville. With some encouragement from a sedulous writer named Tom (Paul Bettany), the little community agrees to hide her; in return, Grace sets about doing happy little tasks for the apple-cheeked townsfolk. But when the police come to town bearing “Wanted for robbery” posters, the people of Dogville demand a better deal in exchange for the risk of harboring poor Grace; the chores are no longer pleasant ones, and she learns the hard way that all-American goodness is relative.

The action is merrily narrated by John Hurt, and it all takes place on a bare, chalk-outlined studio stage with minimal props and stenciled letters that indicate things like “Elm Street” and “gooseberry bush” and “dog” — a subversive homage to Our Town (which also wasn’t very connected to reality when you think about it), and it works surprisingly well.

Casting is first-rate. Tom's dad is the town doctor (Philip Baker Hall); Stellan Skarsgård is a scuzzy apple-grower; Patricia Clarkson is his intellectual wife; Ben Gazzara is the all-seeing blind man; Lauren Bacall runs the general store; Blair Brown (remember The Days and Nights of Molly Dodd?) is Chloë Sevigny’s tight-assed momma. There are assorted other citizens and their young’uns, and James Caan

You may have heard early buzz that this is a devious, nasty, anti-American movie. Well, it is, and I respect it for that. Director even turns up in a small but critical role late in the film. Lars von Trier (Dancer In the Dark, Breaking the Waves) may be a misogynist asshole recluse who has never set foot in our great land, but he certainly has some keen observations about the contemptible unwritten rules we have for exploiting “outsiders”: they must never stop working to prove themselves, and they will always be reminded that they don’t really belong. Crimes against them will go unpunished, and freedom will be a means of blackmailing them into respecting us and our ways. They’ll get paid less to do more work, and, by God, they’ll like it.

OK, I’ll admit that the Brechtian alienation got to be a bit much (even for my bitter leftist ass), and by the time the ending credits rolled with David Bowie’s happy-peppy “Young Americans” playing over shocking images of all-American squalor and abuse and unpleasantness, I’d had quite enough.

But Nicole sure looked smashing.