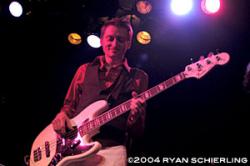 How remarkable that Harvey Danger was not only able to remember the date of their first show ten years ago, but on its seven year anniversary, they played their "we're not breaking up but this is our last show for a long long time." AND THEN, on the ten year anniversary of their first show, they played this… their "we never broke up but, for the most part, this is a reunion show" show.

Such a meaningful scheduling schema certainly wasn't lost on me or my fellow 500+ Harvey Danger supporters. Did you hear about the line all the way down 2nd Avenue waiting to get into the Harvey Danger show?

Hear about it? I was in it! Maybe we should stop writing this and just transcribe our text messaging when you were inside watching Nada Surf and I was outside in line. That was one of those times I really wished I was imaginary so I could have floated right on in.

Ok, quick change of subject and ultimately back to the intended subject: A Harvey Danger reunion show was something I never thought I'd ever live to see. I arrived way early and stood my imaginary ground even when the superfans tried intimidate me to the back of the crowd with their encyclopedic HD knowledge. Thank goodness for my strong will and stronger bladder.

Unfortunately, my will and bladder are not nearly as hearty. Luckily Sean Nelson is so tall {or is it just his hair that gives him the illusion of height?} because I feel like I had the benefits of a front and center view with the comforts of being in the back row.

OK, I'll admit it. This was my first Harvey Danger show… yet I was just as wrapped up in the momentousness of the evening's performance as the fervent fans closing in on me.

While waiting for HD to take the stage, I was fidgety with anticipation. Harvey Danger was performing at the Crocodile… and I was just couple feet from the front and a just little bit off center!

As you may or may not know, I am already a big Sean Nelson supporter. I adore him for his contribution to the Long Winters… his karoake performances at previous TIG events… his charm… his wit… his hair. And this evening's performance gives me another reason to add to the list. As Sean stated in an interview {with us, which we haven't been able to get up online yet, even though we are dying to}, his best instrument is that of "frontman."

As frontman, he is both theatrical and indie-pop. He hit each note perfectly of all songs old and new {YES, they played NEW UNRELEASED SONGS}. I think the MOST entertaining facet of Sean's performance was his banter. He openly discussed the fact that he didn't get a chance to use the restroom before the show started and therefore had to pee really bad. Another cute Sean-ism was the way he kept taunting the audience with allusions to playing the-overplayed-but-a-perfectly-fine-song-in-my-humble-opinion "Flagpole Sitta." By the time they finally got around to playing it, the frat boys were foaming at the mouth.

The rest of the band was in top form as well. Aaron Huffman's bass mastery {you might have heard evidence of this in his work with Love Hotel} and Jeff Lyn's keyboard/guitar catchy rift-making. The non-Sean members of the group provided a perfect backbone for sean, demi-god of all that is front-man.

Yes! He even had local guest musicians come up for a couple of numbers. Did you see the illustrious Jenny Jimenez from The Catch up there?

Zow! She's hot stuff! It was cute to see her pop up stage right for a chorus here and there. My favorite part was on "Sad Sweetheart of the Rodeo."

This was the perfect way for me to spend Administrative Professionals Day.

It really was a reunion show, not only for Harvey Danger, but also for me. I generally associate moments of my life with songs and for some reason "Flagpole Sitta" reminded me of driving downtown in Grand Rapids one day frustrated because the humidity was 110 percent, the sun was blaring, I couldn't find my sunglasses and I was angry.

No, let me finish. Anyway, I was irked until "Flagpole Sitta" came on. I cranked the radio and started screaming the lyrics at the top of my lungs. Even though I was sweating and blind, I was happy.

That's very touching. I'm not sure if I have an association that… erm… interesting.

I, trapped in mostly-music-stagnant Phoenix and always yearning to be cool, searched out Harvey Danger and came upon one of their videos. The takeaway? Proclaiming, "I didn't know who that lead singer is, but he was soooooo cute! Is he single?"

I recently watched the video for "Sad Sweetheart of the Rodeo" which is one of my favorite Harvey Danger songs.

Oh! The one with cowboys and the cubicles… the data wranglers! And it ended with a pre-Long Winters John Roderick tied up, squirming on the floor! I love that video.

Yes! I wish the Marlboro man would come rescue me from my day job. That video cracks me up. Sean doesn't looks THAT tall on television.

Yeah, neither do I.

Harvey Danger needs to patent the formula for writing great pop songs and sell it for millions.

They did, it's called Where Have All the Merrymakers Gone?

Word. They just did it before most could fully appreciate it.